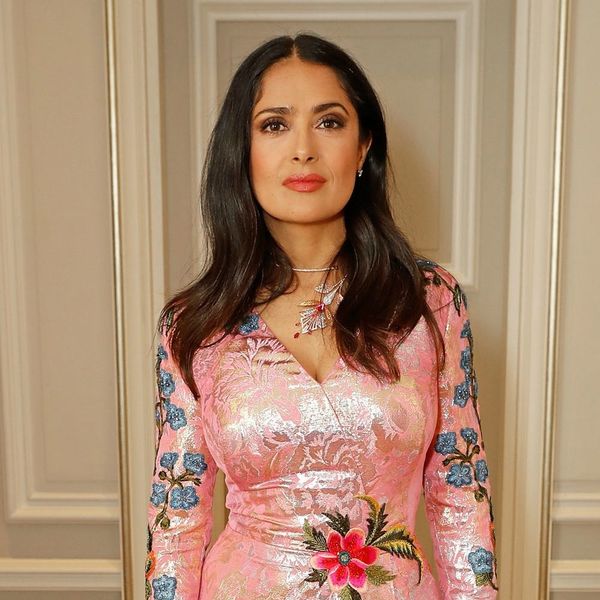 Salma Hayek, a woman known these days for her philanthropy as much as her acting career, has written an op-ed for The New York Times in which she outlines the ways that Producer Harvey Weinstein allegedly abused her while she tried to get her Oscar-winning film Frida made, proving that abuse can come in many forms.

“I hid from the responsibility to speak out with the excuse that enough people were already involved in shining a light on my monster,” Hayek writes. “I didn’t consider my voice important, nor did I think it would make a difference.”

Her “voice” tells a heartbreaking tale of alleged abuse at the hands of Weinstein. Hayek explains that she was introduced to the producer — then the head of Miramax Films — when she began working towards her dream of seeing the life of Frida Kahlo on the big screen and went on to professionally court the producer on account of his reputation for supporting exciting new films. But there were problems from the start.

Hayek reports that Weinstein had unreasonable demands of her, including demanding that she cast four major Hollywood actors, rewrite the script, AND find a producer willing to front the money — all things she managed to achieve thanks to powerful Hollywood friends, and much to the rage of Weinstein.

“I was so excited to work with him and that company. In my naïveté, I thought my dream had come true. He had validated the last 14 years of my life. He had taken a chance on me — a nobody. He had said yes,” Hayek said, before adding, “Little did I know it would become my turn to say no.”

Hayek says that Weinstein regularly showed up on various film sets (including non-Miramax films) to ask Hayek to take a shower with him, or give him a massage, or even to allow the producer to watch her shower. She also writes that Weinstein allegedly made repeated requests for sexual favors, among the many boundaries she says he crossed. All the From Dusk ‘Till Dawn star’s repeated ‘nos’ lead the producer into a fit of rage.

“I will kill you, don’t think I can’t,” Hayek reports her alleged abuser saying. And it only went on, she writes, with Weinstein reportedly belittling her performance in her opus Frida and eventually insisting the film needed a sex scene with Hayek and her co-star, Ashley Judd (another of Weinstein’s reported targets). He got his way on many unreasonable demands, but Hayek persisted.

The movie went on to win two Oscars, though Hayek writes that Weinstein always seemed irritated that the star never succumbed to his alleged efforts to break her down. Hayek says that in the immediate aftermath she didn’t think her story mattered, partly because she didn’t feel like anyone would believe her, and partly, she says, because women’s work in the arts has been devalued as long as she has been working.

“According to a recent study, between 2007 and 2016, only four percent of directors were female and 80 percent of those got the chance to make only one film,” Hayek writes. “In 2016, another study found, only 27 percent of words spoken in the biggest movies were spoken by women. And people wonder why you didn’t hear our voices sooner. I think the statistics are self-explanatory — our voices are not welcome.”

Hayek hopes that things continue to change for the better for women, and feels grateful that the voices of the abused are finally being heard. ” Women are talking today because,” she says, “in this new era, we finally can.”

What do you think of Salma Hayek’s allegations? Tell us @BritandCo!