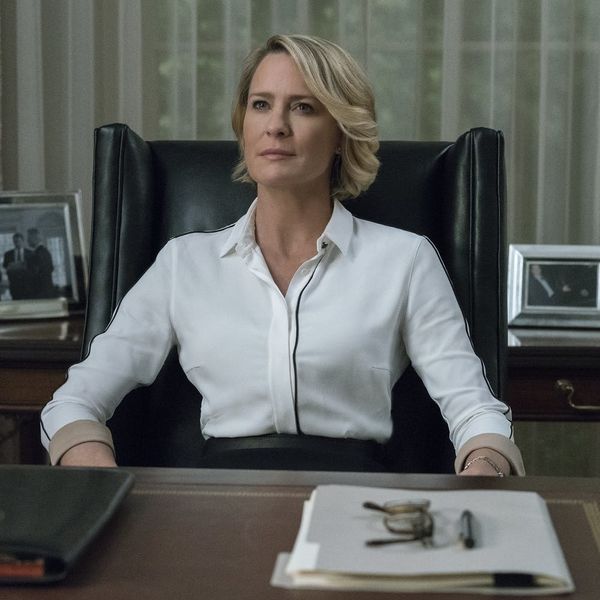 When Netflix announced that House of Cards had been canceled and production on season 6 had been halted amid sexual misconduct allegations against the series’ star Kevin Spacey, no one was sure what the show’s future might hold. And while there were rumors about a possible spin-off featuring none other than Robin Wright, it now looks like she’ll be leading the final episodes of the Netflix hit — without Spacey.

When the fifth season of the Emmy-winning show came to a close, fans watched as Wright’s character, Claire Underwood, declared, “My turn.” Now, Netflix chief content officer Ted Sarandos has confirmed that it will indeed be Claire’s turn in the spotlight, as production is set to resume next year, sans Frank Underwood.

According to Variety, Sarandos made the announcement at a UBS conference in New York on Monday, saying, “We are excited to bring closure to fans.”

Production is still on pause for the rest of the year, though. And when the cast and crew return to set in 2018, they’ll be shooting just eight episodes — a significant cut from the 13 episodes that were included in season 5. Spacey, whose professional relationship with Netflix was severed last month, will be written out of the show.

But we have no doubt that Wright, who won both the Golden Globe for Best Actress in a Television Series Drama and the Emmy for Outstanding Lead Actress in a Drama Series for her role on HoC, will step up to lead the show through its final days. And we’re curious to see what’s ahead for the formidable Claire Underwood.

What do you think about the choice to have Robin Wright lead the final season of House of Cards? Let us know @BritandCo!