This Might be the Most Epic Trash the Dress Shoot Yet 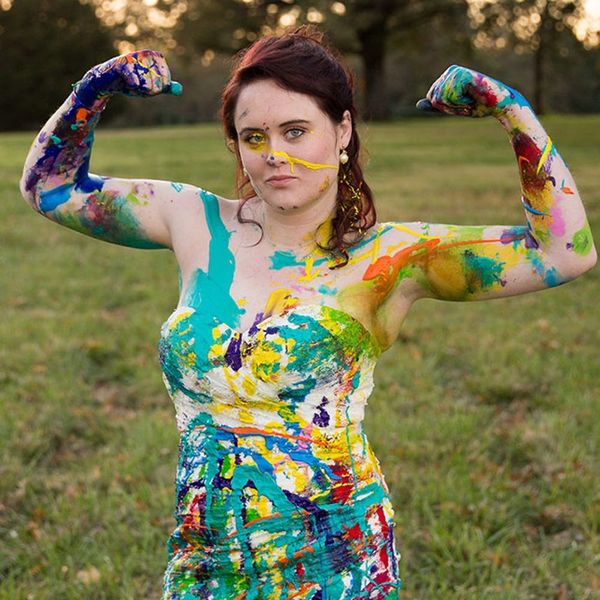 When you picture a bride who’s been jilted at the altar, visions of tears, pity parties and returned gifts tend to come to mind. Paint and smiles? Not so much. However, after Shelby Swink, a Tennessee bride, was ditched by her fiancé just five days before their wedding, that’s exactly what happened. Rather than locking herself in her room with a Costco-sized supply of Kleenex on what would have been her wedding day, Swink gathered her bridesmaids, family and Elizabeth Hoard, her wedding photographer, for what might be the most epic trash the dress shoot yet. We had a chance to chat with Elizabeth about the whole affair. Here’s the inside scoop on the bride’s backstory and what she had to say about the unconventional and empowering shoot.

First, a little background: Shelby and her ex-fiancé had been dating since 2011, when they were both athletes at the same university in Tennessee. In March of 2014, the two decided to take their relationship to the next level and got engaged. Then after months of planning, with five days until the big day, Shelby says, “My fiancé and I sat down and he told me that he was not in love with me and did not want to marry me or spend the rest of his life with me. I was in complete shock and had no idea what to think or do. I was numb. The next couple days were a blur of calling guests, canceling services and figuring out our living arrangements.”

We asked the wedding photographer, Elizabeth Hoard about how she heard the news. Elizabeth told us, “Five days before her wedding, her mom called me. I knew the moment she asked to speak with me that something was terribly wrong. Through the emotion in her voice, Veronica told me that the wedding had been called off. Our conversation lasted less than a couple minutes. While my contract with the Swinks had been fulfilled and there was no more wedding to shoot, I knew that I didn’t want to just end things there. There had to be something I could do. Some way I could possibly help in this hard time.” So two days after that phone call Hoard messaged Swink with an idea:

What ensued was a shoot filled with color, glitter, feathers, champagne, cigars and a whole lot of laughs. Hoard says, “During all of this time I kept waiting for Shelby to cry or get mad: two expressions I would fall back on repeatedly if this had happened to me. But she never once said anything about her ex. She never teared up.”

While Hoard is certainly no stranger to shooting a wedding, she has never shot a trash the dress session before. But hey, if you’re going to do it, do it big right? “While I hadn’t seen one done in the Memphis area before, I had certainly seen and heard of them being done across the country,” Hoard says. “Elizabeth Gilbert (author of Eat, Pray, Love) wrote about my pictures and Shelby’s session on her Facebook page. She said that while Shelby didn’t have a wedding ceremony that day she ended up having a different ceremony of sorts through trashing her dress. I couldn’t have agreed more. Shelby had a ceremony of friends, family and finding happiness in who she was as a woman independent of her connection to a man. A ceremony of celebration of the life she was about to begin. One filled with hope and optimism and a whole lot of paint.”

If you’re in the Memphis area and want to check out Swink’s paint splattered wedding dress for yourself, it is currently on display at wedding gown broker The Barefoot Bride. A portion of proceeds from the shop’s sales will go to Be Free Revolution, a locally established non-profit helping to empower men and women in Africa with trades for sustainability as well as feeding, education and counseling programs in nearby schools and orphanages.

And what does Shelby have to say about all this? “I can’t even describe how liberating and cathartic the trash the dress experience was for me,” she says. “The moment the paint hit my dress I was free. I let go of all the hurt and disappointment and became myself again. I am a strong woman who believes that everything happens for a reason. We all face adversity in our lives, but what really defines us is how we decide to overcome that adversity.”

What’s the best “Trash the Dress” session you’ve ever seen? Share a link with us in the comments below.

Cortney Clift
Cortney is the senior writer and special projects editor at Brit + Co. She typically covers topics related to women's issues, politics, and lifestyle. When she's not buried behind her computer you'll find her exploring New York City or planning her next big adventure.
Wedding Style