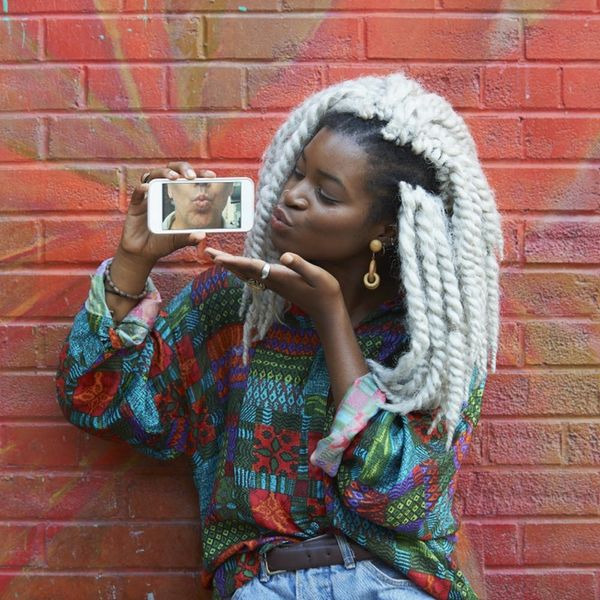 You’ve met a special someone on a dating app, and they asked you out to dinner. Intrigued by their charm, cute pictures, and good conversation skills, you agree to the hangout. But before you leave for the night, you probably do one thing (other than tell your best friend where you’re going and what tonight’s coded get-me-out-of-here text should be) — you stalk them of social media, of course. Like most singles in America, we’re totally guilty of stalking our date’s Instagram, Twitter, and Facebook pages before we head out on a first date. But according to Match’s 2018 Singles in America study, there are a few things singles do on social media before a first date that are probably turning their potential partners off. From when to follow your crush on Instagram to the rules of changing your phone background to a couple photo, here are nine social media etiquette rules to follow when starting a new relationship.

4. After a few dates, you can probably follow your date on social media and chat via direct message. Okay, you’ve been out with the person a few times and have ruled out the possibility that they’re a psycho catfish serial killer. A bit over a third of singles say it’s now time to start following each other on Instagram (plus there’s the other third who’ve already started following their dates earlier on). By this stage, roughly 75 percent of singles are totally okay with being friends on Facebook and chatting on Facebook Messenger.

9. Only change your phone screen to a couple photo once you’re in a committed relationship. Now that it’s finally acceptable to change your social media profile to a photo of you two lovebirds (two-thirds of singles agree), you can pretty much do any couple-y thing you’d like on social media — including changing your phone screen to a couple photo. Just remember, if you’re not sure how your partner will react to something you do or say on social media, don’t be afraid to ask them about it before posting it online.

Have you used social media to check up on an S.O. before a first date? Tweet us about it @BritandCo.

Ashley Macey
Ashley Macey is a lifestyle freelance writer who loves all things fitness, wellness, and creativity. When she's not exploring her home in the Pacific Northwest with her dog Max, you'll probably find her curled up with a good book and some hot tea. Follow her daily jaunts on Twitter.
Dating
Relationships
Dating Relationship Advice social media
More From Relationships