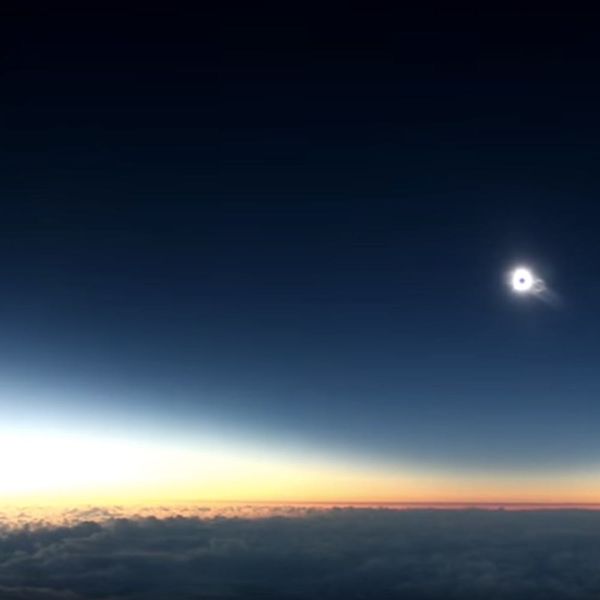 Looking to be left awestruck and inspired by the grace and beauty of the universe? Well, this amazing flight will do the trick. This isn’t your typical trip from point A to point B, complete with (maybe) an in-flight movie and an iffy meal. Flight 870 from Anchorage to Honolulu on March 8 was truly something out of this world. Like, solar eclipse out of this world!

Leaving at 2 p.m. Alaskan Standard Time, the pilots adjusted their originally scheduled departure in order to cross the path of the total solar eclipse that would be happening at the very same time.

In a blog post titled, Chasing the shadow of the moon (which is totally awesome in itself), Alaska Airlines says, “In window seat 32F, Joe Rao will be one of the dozen astronomers and veteran “eclipse chasers” among the 163 passengers on board, gazing out oval windows as the moon blocks the sun for nearly two minutes.”

The scientists and lucky travelers on board got a once in a lifetime experience — and we can get in on the awesomeness too! Check out this wildly incredible video of the event — complete with a super excited narrator having the geek-out time of his life!

The incredible imagery is like nothing we’ve ever seen before, and we guarantee you that this footage will inspire many future poems, paintings, song lyrics and designs… maybe even yours!

What’s the most amazing thing you’ve ever seen during your travels? Tweet us @BritandCo!

Desiree O
Desirée O is a ‘Professional Bohemian’ who loves anything and everything related to the arts, entertainment, and pop culture. She ADORES being a ‘Newsy’ for Brit + Co, covering all of the latest tidbits of awesomeness that you want to read about. When she’s not writing, she’s either making messy art, going on long adventurous walks with her camera, or poking around over at bohemianizm (http://www.bohemianizm.com/). You can find out about Desirée O and her work at http://DesireeO.com/ or follow her on Twitter @DesireeO.
science
Entertainment
science