I Tried a 3-Day Soup Cleanse + Here’s What Happened 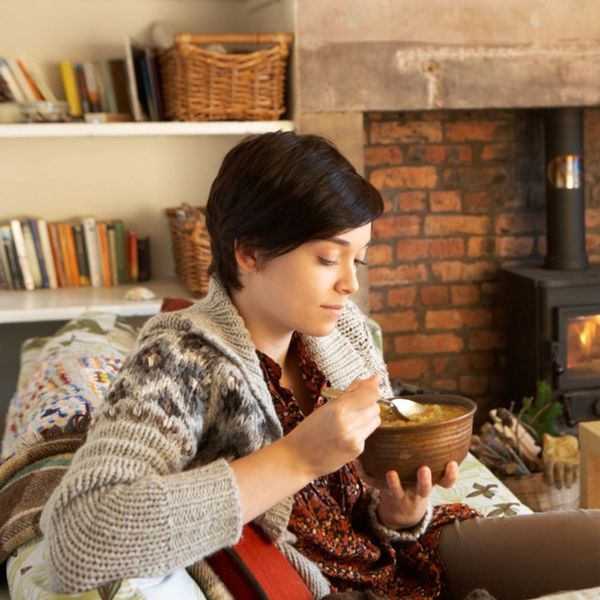 I live my life by a simple motto: If it’s good enough for Gwyneth Paltrow, it’s good enough for me. Which is a ridiculous motto for me to live by, apparently, since the only perfume good enough for GP is organic and costs about $763 an ounce, while I ration out my Jo Malone sample spritzer for first dates only (and I don’t go on a lot of first dates). Nevertheless, here we are. When I saw a soup cleanse recommended on Goop as a detox option, I thought, I can do that. I’m self-aware enough to know that I’m too food-obsessed to do a proper juice cleanse. But soup? It’s cold outside, it’s cozy inside and hot, brothy soup is super comforting. Plus, most soup cleanse experts say that three days are all you need to feel the benefits. Back in December, I decided to make it my weekend mission to detox before I was mainlining sugar cookies and spiced cider during the holiday season.

I’m following the Soupelina’s Soup Cleanse rules for soup cleansing, since author Elina Fuhrman’s Pinterest presence makes her feel like the unofficial leader of the trend. And Pinterest popularity is how I make all of my choices, which is why I currently own 83 plants, have tiny tattoos all over my fingers and dyed my hair pink. Just kidding. (I only have four plants.)

Every morning, you’re to start with a hot water and lemon juice to jump-start your digestion in a healthy way (rather than using caffeine, which is more jarring to your bod). Otherwise, you literally just eat soup three meals a day, for three days straight.

You’re not allowed caffeine, alcohol, sugar (not even from fruit!), meat, nicotine, soda, wheat or processed or fried foods. I’m a vegetarian nonsmoker who eats organic almost exclusively and only drinks soda to cure a hangover, but I have a penchant for cookies, wine and lattes. I’m not sure whether I should be feeling smug or scared.

For snacks, you’re allowed broth and pumpkins seeds, and you can “indulge in raw cucumbers, celery, radishes or cauliflower as your heart desires.” I’m on to your semantic tricks, Elina. I’m pretty sure it’s impossible to “indulge” in a water-based vegetable, and I’ve never met anyone whose heart desired a radish. Frankly, I find the rhetoric to be borderline dangerous!

What’s Even the Point?

Here’s what Elina promises with the soup cleanse in her book: “Not only will you look forward to your next meal, you will notice improved energy, fewer headaches, less fatigue and crankiness and the bonus: You will lose weight (up to a pound a day!).”

The Goop article reminds us that soup is really low on the glycemic index (since soup is all veggies and no fruit), packed with fiber and nutrients and easier on the digestive system (since your body doesn’t have to work as hard as when it breaks down solids).

The main idea is that you’re “resetting” your body: killing cravings, clearing “toxins” and eliminating preservatives from your diet to improve your overall health. I can get behind this!

Elina recommends making a variety of soups for your cleanse so you don’t get bored. This prophecy will end up haunting me in the end, but I’m not made of money or time, so I decide to make three different soups: one for each daily meal.

Breakfast Soup: I don’t love breakfast foods, so I’m totally into the idea of eating soup before noon. I am feeling decidedly subversive as I make spiced cauliflower soup for my first meal of the day. Take that, waffles!

Lunch Soup: I made this roasted asparagus soup multiple times when I did the Whole30 two years ago; it is so good, cleanse or no cleanse. The onions add a nice depth of flavor, and I roast double the amount of garlic for an extra kick.

Dinner Soup: Since my other two meals are pureed, I choose to go luxe for dinner with a hearty lentil soup. My apartment smells amazing, and I’m looking forward to indulging in my culinary creations all weekend.

I’m pretty sure my shoulder-length brown hair grows several inches and turns a radiant shade of flaxen blonde as I pour my filtered hot water and organic lemon juice into a mug at 7am. Someone call Chris Martin, ’cause I have arrived. About an hour later, I make the cauliflower soup and have a bowl for brekkie. I’m chillin’.

Around 11am, I develop a headache that does not leave my brain all weekend. I can only think it’s caffeine withdrawal — though I only ever have one latte or iced coffee a day, so it’s not like I should be fiending. I take some Advil and continue working.

I #treatmyself to a plate of radish and cucumber slices at 3pm because I’m feeling hungry and tired. I’ll admit, the crunch of the cucumber and the spice of the radish wake me up, and I easily finish the rest of my work day.

It takes a lot of soup to feel full, is the thing I’m realizing. Dinner comes and goes, and while it was delicious and filling in the moment, I’m super hungry again by 8pm but can’t bear the thought of another radish. I just go to bed early to avoid feeling hangry any longer.

I wake up and am immediately depressed. The cauliflower soup is taunting me from the kitchen, and I can barely muster the strength to warm it up on the stove. I am a person who derives considerable joy from food: I will pore over a menu before hitting up a new restaurant, plan dinner parties with precision and drive 20 minutes out of my way for the best French fries. While my soups are indeed tasty, knowing that they’re all I have ahead of me on this dreary weekend is moderately soul-crushing.

Around 1pm, I GChat a friend of mine to ask, “What are you having for lunch? Can you chew it?” I find myself becoming obsessed with food — not necessarily craving anything crazy but wishing for a couple of veggie tacos with a side of guac. (It’s dawning on me that I chose the wrong cleanse.) I spend the afternoon cleaning my apartment and running errands, which thankfully takes my mind off it all for a few hours.

Eating dinner soup alone on a cold Saturday night only intensifies my despondency. Maybe I should have coerced a friend into doing this with me? Even though the lentil soup is bangin’, I’m left feeling unsatisfied and moody.

I cheat today. After lunch soup but before dinner soup, I go out to do some holiday shopping with a friend, and the lure of a gingerbread latte gets the better of me. I’ve been miserable all weekend and am irrationally angry at this self-imposed ban on all the things that bring me pleasure. My mood is immediately buoyed by the first sip, and I feel not even the slightest trace of guilt. PS, Elina, this is what indulging looks like.

I finish off the rest of my lentil soup that night with the anticipation of a kid on Christmas day — if only because it means I’m finally done with this dumb idea forever!!!!! In other, definitely unrelated news, I’m an Aries with a Scorpio moon and have a tendency toward the dramatic.

When I recently spoke with Geri Hirsch, a wellness goddess whom I admire, she said, “I think cleanses are going out the window, and instead clean eating year-round is taking its place.” This is my vibe. Improved mood, more energy, better digestion and no headaches are easily achieved with smart food choices every day, which has nothing to do with whether or not you’re chewing your meal.

With that said, this is no (night) shade at Elina (cleanse joke!). I can totally get behind cutting out processed foods, booze, sugar and caffeine from your diet every once in a while if you’re feeling certain cravings spiraling. But since cleanses aren’t designed to be sustainable, it’s hard to measure any long-term benefits, at least for me. I’d rather incorporate her healthy suggestions and tasty recipes into my diet in an organic, seamless way, rather than going cold turkey. (Or hot soup.) (Done with the cleanse jokes.)

Have you ever done a soup cleanse, or would you consider it? Tweet us @BritandCo with your thoughts!