18 Signature Spring Break Cocktails to Try Based on Your Destination 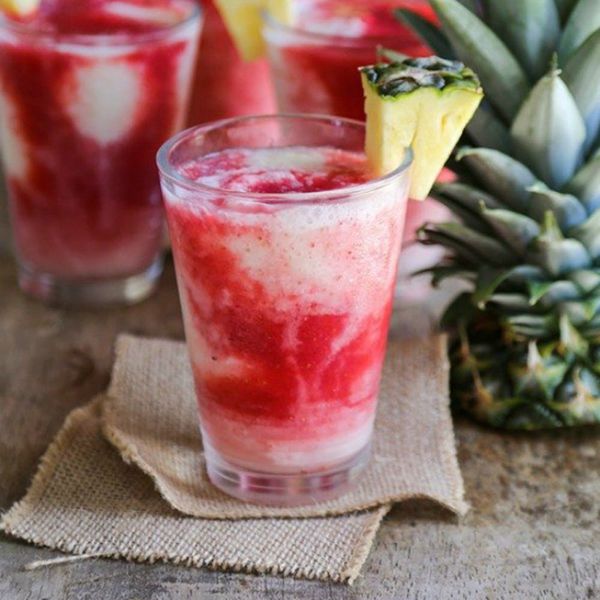 Spring’s almost here, and everyone’s got the travel bug. If you’re off to someplace exotic to soak in the sun, be sure to take in some local culture too, because the whole point of travel is to try new things, amiright? There’s no tastier way to expand your horizons than to try new foods and cocktails from around the world. But if there’s no spring break in your plans this year, no need to make a sad face. With these cocktail recipes, you’re just a shaker away from experiencing the ultimate staycation in a glass that will turn that frown upside down. Here are 18 spring break cocktails guaranteed to get both vacationers and staycationers in the mood to PAR-TAY.

1. Hurricane Party Punch Recipe: When Big Easy restaurateurs faced a post-prohibition glut of bootleg rum on the market, they concocted this irresistible punch, calling for copious amounts of rum sweetened with exotic passion fruit syrup tempered with zesty lemon juice. One sip, and you’ll see why the bootlegger’s loss was our gain. (via Liz on Call / Bread Booze Bacon)

2. Lava Flow Cocktail: The Lava Flow, AKA The Miami Vice, is half daiquiri and half piña colada. Which part represents Crockett and which part is Tubbs? You’ll have to taste, and be the judge. (via The Chic Site)

3. Smoky Pickled Strawberry Margarita: When a Tijuana bartender needed a cocktail that appealed to the ladies, he grabbed up the ingredients on hand for tequila shots, sweetened it all up with simple syrup, and voila! — the margarita was born. On behalf of *ladies* everywhere, we say gracias. (via Cali Girl)

4. “Papa Doble” Daiquiri: Key West resident celebrity Ernest Hemingway reportedly liked these daiquiris so much that he allegedly sucked back 17 in a single sitting. Seems Papa Hemingway wasn’t a fan of sweet drinks, so his namesake daiquiri excludes added sugar, but the tasty maraschino cherry liqueur more than makes up for it. (via Go Go Go Gourmet)

5. Mexican Martini: While these cocktails are called martinis, they’re actually margaritas in disguise. Calling for standard margarita ingredients, they’re spiked with olive juice and sure to add a whole lotta olé to your fiesta! (via Five Heart Home)

6. Perfect Dirty Martini: No casino destination would be complete without a martini, shaken not stirred. This James Bond fave is made up of six parts gin and one part dry vermouth and, just like 007, it packs a stealthy punch. (via Two Sisters Kitchens)

7. Texas Bittersweet Tea: This version of Texas Tea calls for Texas ruby-red grapefruit juice sweetened with Italian Averna poured over strong black tea. It’s a pitcher-friendly recipe, so invite some locals to gather around and make friends. (via 10th Kitchen)

8. Coco Loco: Often drunk straight from a coconut shell, this isn’t a cocktail so much as a whole tropical vacation in a glass. While various versions of this drink can be found across the the Caribbean, the Dominican recipe calls for coconut cream and three liquors — hence the name “the crazy coconut.” (via Manu’s Menu)

9. Paloma: Ask an American what people drink in Mexico and they’ll say margaritas, but ask a native Mexican and they’ll tell you it’s palomas. They’re easy-peasy to make, calling for just two ingredients — tequila and a grapefruit soda, such as Jarritos or Fresca. (via The Life Styled)

10. Mojito: Created during an era when rum was unrefined and scarcely drinkable, the mojito’s added sugarcane juice, muddled mint, and squeeze of lime helped the drink go down real easy. Now that rums are smooth and refined, the Cuban cocktail is downright addictive. (via Noble Pig)

11. Brown Derby: Some drinks are so rooted in cocktail legend, it’s like bartenders everywhere are mixing up living history. Sip on a Brown Derby on your next trip to La La Land, and you’ll be drinking in the essence of Old Hollywood. (via Gourmande in the Kitchen)

12. Dragonberry: San Juan aficionados know to hit up the free Bacardi rum factory tour, which ends with cocktails at the outdoor bar, gratis. It may well be the fruity Dragonberry sipper on offer that keeps ’em coming back for more. (via The Novice Chef)

13. Sex on the Beach: This ’80s cocktail was *allegedly* invented to appeal to the two things Florida spring breakers were hoping for. Or… maybe it was just too much fun to say to your beach-buff bartender: “I’ll have sex on the beach.” (via Pickled Plum)

14. Caipirinha: Brazil’s national cocktail, the caipirinha, is made with cachaça — a spirit distilled from sugarcane — and lots of muddled lime, so it’s both tart and sweet. The recipe is so simple, you can carry the three ingredients in your cooler bag and shake one (or two) up right on the beach. (via Supergolden Bakes)

15. French Pear Martini: It’s a French tradition to serve fruit cordials like elderflower as an aperitif before dinner to stimulate the appetite. The elderflower and pear combo in this drink is definitely like a burst of spring to your tastebuds. (via Home & Plate)

16. Rum Punch: This classic rum punch is easy to make in quantities that are guaranteed to get the PAR-TAY started. One sip of this cooler will transport you to a tropical island where the skies are blue, the water is crystal clear, and the drum rhythms encourage a decidedly leisurely pace. (via Inspired by Charm)

17. Bahama Mama: Break out the paper umbrellas and prop up your feet. With this tall chilled cooler in your hands, you’re officially on island time. (via Cooking With Curls)

18. Tequila Sunrise: This citrus state sipper is like looking at sunshine in a glass. The color gradient is so eye-catching — it’s as beautiful to behold as it is to drink. (via Averie Cooks)

Sally Jones
Sally Jones is a writer and editor living in New York City. She has worked at many websites including iVillage, Ladies Home Journal, More, Parenting, Cosmopolitan, The Knot and YourTango, in jobs ranging from editor to COO. Renovation and interior design are her unhealthy obsessions hobbies. She has renovated every home she's lived in, including the rentals, and like... whoa, who does that? You can catch her at her blog Renov8or.
Drink
Cocktails
Drink recipe roundup Spring Break
The Conversation
More From Cocktails