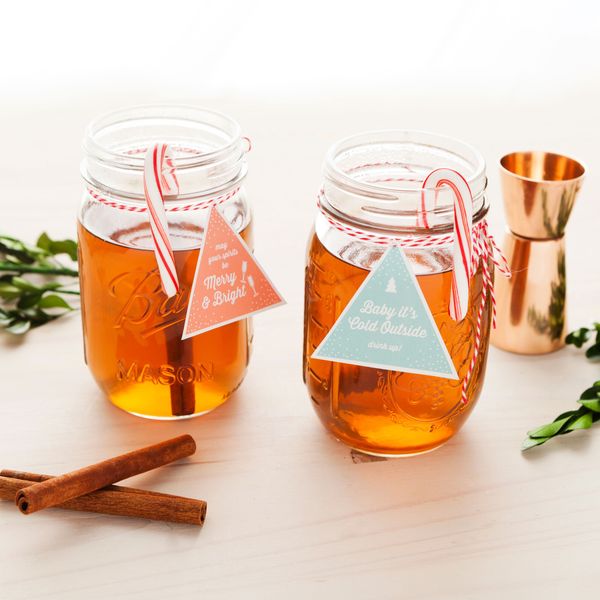 Whether you’re going to a fancy holiday party or snuggling close with friends on the couch, a good cocktail is a requirement for the holiday season. We decided to give the classic hot apple cider an alcoholic twist: We’ve spiked the winter staple with cinnamon whiskey and honey whiskey. In this tutorial, we’ll show you how to make this portable cocktail to hand out as a party favor or last-minute stocking stuffer. We’ve also included printable gift tags that make this ultra giftable.

These mason jar cocktails are great to take with you on a snowy, post-Christmas dinner stroll. It’s warm, spicy and so satisfying for that sweet tooth. Scroll on to read the full tutorial!

Gather your materials and ingredients and let’s get started!

First, print out our gift tag template and cut out each tag. Thread your needle with the baker’s twine and puncture the tag through the marked hole.

Once your tag is strung, wrap the twine twice around the neck of the mason jar. Tie the twine to secure it in place and trim it, making sure to leave about four inches on either end.

Tie the twine around the cinnamon stick and candy cane.

Once the cinnamon stick and candy cane are secure, tie a bow with the twine and trim the ends.

Who wouldn’t want this boozy party favor? It’s a great way to send the party home with your guests.

These make great gifts for Anchorman fans too!

Pour the entire contents of the apple cider packet into the mason jar, then fill the jar all the way up with hot water.

And finally, add the cinnamon stick to the drink. Garnish with a mini candy cane.

What other cocktails are you mixing up this holiday season? Tell us in the comments below.

Marianne Koo
As Brit + Co's kit designer, Marianne starts her day fresh-faced and ready for action and ends it covered in glitter, glue, and fabric scraps. She spends most of her time figuring out how to hack all things under the sun, and feels ultimate gratification from helping others tap into their innate creativity.
Cheap Gift Ideas
DIY Recipes
Cheap Gift Ideas Christmas DIY Gifts Gift Ideas Mason Jar Stocking Stuffer Ideas
The Conversation
Reviews:
More From DIY Recipes