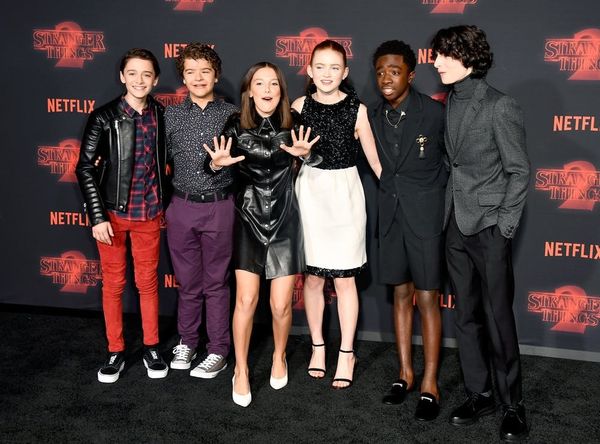 Stranger Things season 3 won’t be released until sometime in 2019, but a new video released by Netflix is giving us a quick fix and getting us into the holiday spirit — or at least doing a good job trying.

Millie Bobby Brown (Eleven), Finn Wolfhard (Mike), Noah Schnapp (Will), Caleb McLaughlin (Lucas), Gaten Matarazzo (Dustin), and Sadie Sink (Max) all appear in a new clip that sees the crew — in their best festive ‘fits, no less — gather to wrap presents for (and even give special shout-outs to) some of their lucky superfans around the world.

But things get off to a bit of a sloppy start. As the young actors hunker down and fight for floor space to do their thing, it’s quickly revealed that gift wrapping might not be the group’s strong suit. The one exception? Sink, whose costars all agree that she’s the best wrapper of the bunch.

“She’s perfect at everything she does, you know?” McLaughlin says of his costar, before adding, “Okay, not like that!” Unfortunately, Brown gets called out by Matarazzo as the worst gift wrapper.

It doesn’t help, of course, that they keep getting distracted by other things, like taping one another’s faces, dancing, and discussing their favorite rappers.

The cute clip concludes with the cast wishing viewers a happy holiday season. But then the spooky Stranger Things theme song plays, just to remind you that evil is always lurking around the corner.

Check out the video below.

Who would you say is the best wrapper in the Stranger Things crew? Let us know @BritandCo.