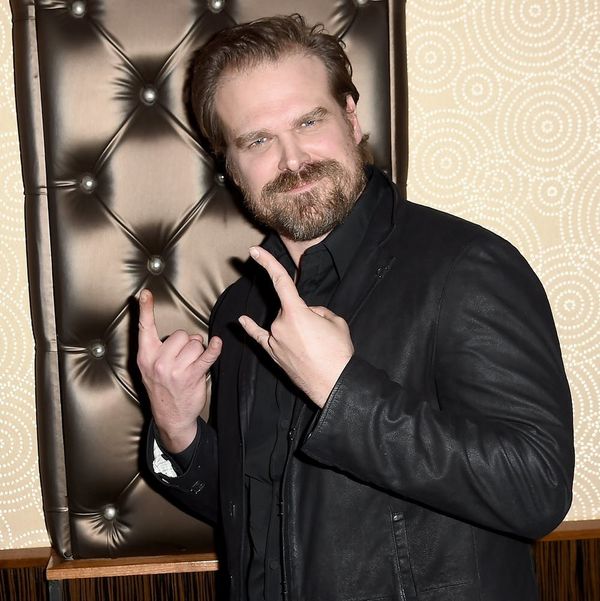 Fans have been in love with David Harbour’s relationship with his Stranger Things co-stars ever since his SAG Awards speech sparked a range of curious (and totally entertaining!) facial expressions from Winona Ryder. The star has won hearts yet again with his latest barrage of Hopper hilarity, Instagramming pics of himself over the years that totally twin with multiple cast members of the hit Netflix series.

Fans will surely recognize the actor as Jim Hopper, the fictional Chief of Police of Hawkins, Indiana, the small town where the Stranger Things story takes places back in the ‘80s. But it turns out that if a little time-traveling was involved in the audition process, Harbour could have played a number of the roles. And he has the photographic proof.

First and foremost, he stunned his followers by posting a shot of himself as a young actor side-by-side with a pic of Joe Keery, the fella who plays Steve Harrington. The resemblance is unmistakable. Honestly, look at the hair!

So sick of these slick, handsome reboots. This nostalgia...Hollywood is just fresh out of ideas. Watch the original. #Stopper #Hopeve #strangerthings2 #mytwodads

Though, if you weren’t quite convinced by that particular side-by-side (or just wanted to revel in more of the pair’s grin-worthy twinning), he gave his followers another photo-based comparison that shows how the two certainly share a similar adorable smile. And that’s not even mentioning the comparable outfits and wavy hair.

My instagram forthwith will be nothing but this. Unfollow me pls.

The actor took the comparisons a step further and shared another couple of pics of the duo with Patrick Swayze thrown in for good measure (let’s be honest: If a dude has a chance to compare himself to the dreamy Swayze, he should probably just go ahead and take it!).

He captioned the pic: “The lineage is strong.” He added, as a word of warning to fans who have been goading him: “And I hope this will teach you not to encourage me, internet.🙄😝” Not likely!

The lineage is strong. And I hope this will teach you not to encourage me, internet.🙄😝

Naturally, it wasn’t long before the 42-year-old shared even MORE, though he did want to break away from the pigeon-holing he had initiated: “Sick of being seen now from my Instagram posts as ONLY A ‘Joe Keery’ type.”

That’s why he popped up a pic of himself as a bowl-haired little boy alongside a shot of Noah Schnapp, saying, “I submit my audition for Will Byers. It’s called RANGE, kids, look it up!!”

Sick of being seen now from my Instagram posts as ONLY A ‘Joe Keery’ type. I submit my audition for Will Byers. It’s called RANGE, kids, look it up!!

Though if you don’t think he could handle the role of Will Byers (frankly, not many of us would want to find ourselves trapped in the Upside Down like he did), then maybe he could take over for a curly-hair Gaten Matarazzo as Dustin Henderson. We could see it!

And so can you, thanks to these pics of the pair (Harbour in the old days and Matarazzo in a recent shot) that show a striking resemblance.

Nancy is right, you will drive ‘em crazy, as long as you don’t go brass section next year. Woodwinds all the way, @gatenm123

And if that doesn’t work out, he could always take over for Natalia Dyer. Yes, we’re talking about the actress who portrays the teenaged Nancy. Granted, the resemblance isn’t that spot-on, but the makeup definitely helps.

As silly (and freakishly on-point) as this all is, it’s certainly worth a giggle or two and, TBH, we definitely could use a little more of what we’ve deemed #HoppersHilarity in our lives to make us laugh.

Which is your favorite David Harbour comparison pic? Let us know @BritandCo!

Desiree O
Desirée O is a ‘Professional Bohemian’ who loves anything and everything related to the arts, entertainment, and pop culture. She ADORES being a ‘Newsy’ for Brit + Co, covering all of the latest tidbits of awesomeness that you want to read about. When she’s not writing, she’s either making messy art, going on long adventurous walks with her camera, or poking around over at bohemianizm (http://www.bohemianizm.com/). You can find out about Desirée O and her work at http://DesireeO.com/ or follow her on Twitter @DesireeO.
Netflix
Celebrity News
Netflix TV