Eggs Aren’t Just for Breakfast: Check Out Our Breakfast-Inspired Appetizer 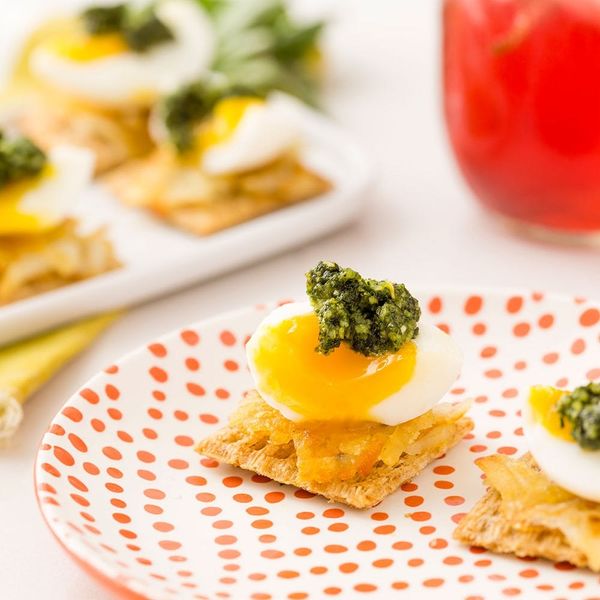 We’ve said it before and we’ll say it again: Eggs are amazing. From the emulsifying yolk to the whites that make a cake more fluffy to being downright delicious on their own, they really are magical. With their versatility in mind, today, in partnership with TRISCUIT, we’re making an egg-topped TRISCUIT Cracker bite that will satisfy your salt tooth with its egg, hash and pesto combination. For this recipe, we’re focusing on the ingredients which come from a family-run farm called Sub Edge Farm.

Why Sub Edge Farm? Recently, TRISCUIT flash-funded 50 artisan food makers unannounced on Indiegogo, supporting dreamers who had simple ideas that were so much more. Among the chosen makers is Sub Edge Farm, based in Farmington, Connecticut. This husband-and-wife team is dedicated to providing great-quality ingredients to their community. Today we’re using some of their eggs to create an egg-topped TRISCUIT Cracker bite that breakfast-all-day lovers will swoon over.

Before we get to the food, let’s talk about the makers.

What do you make?

“We grow clean, nutritious food for our local community.”

Tell us about your farm.

What is the story of how you got to where you are today?

“We are first generation farmers. Before farming, Rodger was an actor and was in a punk rock band. Isabelle studied French literature and fashion design. We met in Montreal, had a long distance relationship (the sort that people say never work out) and eventually got married and had four kids. When we had our first child, we wanted to be able to feed him the healthiest food possible and we set out to grow as much food as we could ourselves, turning our 1/4-acre urban yard into an edible oasis. We simply fell in love with growing food.”

How do you get into the creative flow?

“We do a lot of our planning and dreaming in the wintertime and we write all our ideas on a big piece of paper on the wall. The farm is a like a giant Etch-a-Sketch and each season we get to shake it up and start all over again. It’s really a great big blank canvas. Working outside we feel the forces of nature so much more than when we worked indoors. Heat, cold, rain, snow, storms are all so much more epic and important when everything you have is tied to it. Farming is so dependent on the whims of nature; we feel humbled by the ability to cooperate with it and the challenge of trying to cultivate an edible product from the land.”

Tell us how technology has changed and supported what you do.

“Small organic farmers are extremely creative people and are always coming up with new techniques and systems to improve production, and there is a lot of sharing in the farming community. Farm Hack is a great example of that. We also follow lots of great farmers on Instagram and learn a lot from them. The Internet has certainly allowed us to be a lot more transparent in our farming practices and communicate better with our customers.”

“What’s on your work/studio playlist? Tell us what gets you pumped up for a day of MAKING!”

Music on regular rotation recently: Danny Kroha, Cate Le Bon, Hospitality. Also anything by the Kinks. When we are doing tractor work we like to listen to Chris Blanchard’s Farmer to Farmer Podcast.

And now for the recipe!

We’re going to soft boil an egg and place it atop a TRISCUIT Cracker with potato hash and a dollop of pesto to give it an herbal finish.

If you’re short on time and don’t want to grate the potatoes, use a spoonful of leftover mashed potatoes and store-bought pesto for a speedy alternative choice.

3. For the potato hash, shred one potato, mix with a little olive oil, salt and pepper. Cook in a pan on medium heat until golden brown. Assemble the TRISCUIT Cracker by adding a small spoonful of potato hash, a slice of soft-boiled egg and a drop of pesto.

Next cook up your potato hash. You can use a cheese grater to shred the potato, then cook it in a pan with some olive oil, salt and pepper until it’s golden brown.

To make soft-boiled eggs, place them into a pot of boiling water for four minutes. There are so many ways to soft boil eggs, so feel free to follow the recipe you like best. Just make sure the whites are set and the yolk is almost set but still a little bit gelatinous.

Time to put our building blocks together. Add a spoonful of potato hash to a TRISCUIT Cracker. Then top with a slice of soft-boiled egg and a dollop of pesto.

Look at that perfectly cooked egg. This is what you’re going for, people!

TRISCUIT Crackers are so good with a few unique ingredients on top. Though let’s be honest; they are also just as great on their own. Enjoy!

Roxy Taghavian
Roxy has been creating and executing DIY projects since her very first trip to Michael's as a child. If there's a project at hand, she'll figure out how to make it. When she's not wielding her hot glue gun, she can be found at the beach, traveling to far off lands, reading and running at her gym "The Panhandle."
Recipes
DFP Sponsored
The Conversation