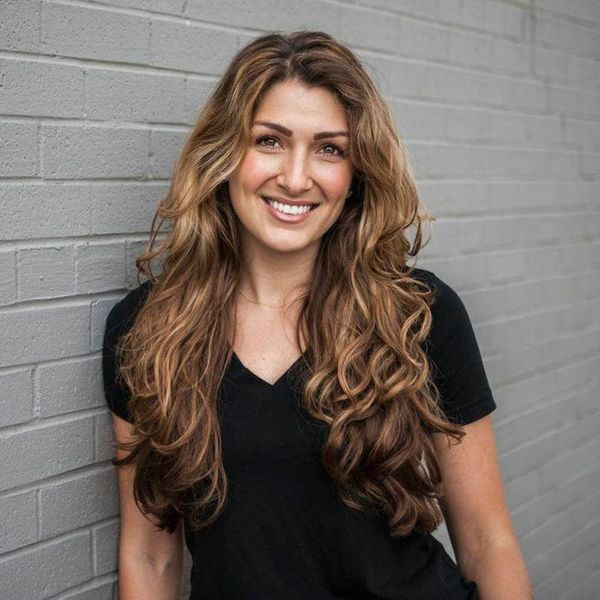 Ladies Firsthighlights women and girls who are making the world better for the rest of us.

If Alexis Jones looks familiar, it may be that you recognize her from 2008’s Survivor: Micronesia — Fans vs. Favorites (she made it to Day 33!), have seen A Brave Heart: The Lizzie Velasquez Story, the powerful 2015 documentary she executive produced, or have come across her name in a Huffington Postbyline.

What the 34-year-old is most passionate about, however, is empowering girls through her non-profit, I AM THAT GIRL (IATG), as well as revolutionizing the conversation surrounding sexual harassment and assault on campus through her latest initiative, ProtectHer.

“I AM THAT GIRL is my firstborn and I am all but in love with her,” confesses Jones. It was 2002 when, as a USC undergrad, she started the program to help girls “transform self-doubt into self-love” by offering them a sense of community and a safe place to discuss what it means to be a modern-day woman.

What a privilege to be invited to this magical #darlingretreat in the Hamptons with 20 powerhouse women all hungry to significantly and positively impact the world. Between morning yoga, delicious meals, sipping coffee, cuddle sessions and "dinner questions" that turn into hours of laughing and crying... I believe we will all walk out of this sanctuary and the world will never again be the same, even if that world is but our own. @aerie #aeriereal @darling

“I think there is a predilection inside female DNA that is hardwired to build community,” the Texas native explains of her inspiration. “Being a girl is hard enough and it doesn’t get easier just because we ‘grow up’ and become a woman, so I’m a huge fan of support groups.”

Over the past 15 years, IATG has grown exponentially to include over 1 million online members and close to 300 chapters across the country. But that’s not quite enough for its founder whose dream is for every girl to be able to “walk into any small town, any place in the world, and find an IATG chapter where they feel seen, heard and that they belong.”

Just a girl and her college football. Don't mind me. #myhappyplace #usc #ut

Today, the public speaker and activist is also devoting her time to a second cause close to her heart — ProtectHer — which she launched in 2014. The program works directly with coaches, athletic directors, and administrators to educate male athletes about sexual harassment and assault through documentaries, guided discussions, and various activities.

After being invited to speak to the top 18 high school football quarterbacks in the country about respecting women, Jones says she “realized very quickly that these guys were absolutely the trendsetters on their high school and college campuses, so I thought it was a great starting point.”

Thanks @taftschool for letting me come kick it with all your students and give my @protecther talk! Always a good day when you get to invite students to examine the cultural script they have been handed and to ask the tough questions, "Says who?!" @iamthatgirl #higherstandards #wedontdothat #begoodhumans

“If I could get their attention and rebrand what ‘manhood’ looked like with and for them, then it would naturally scale faster in their communities,” she elaborates. “As proud as I am of all the high schools and universities that have proactively sought it out as the first preventive medicine to sexual harassment and assault, I am a hopeless optimist and wild dreamer, so I will not be satisfied until it is integrated into every single high school and college in the world!”

And she’s already working on her next initiative: “Launching a badass corporate training program and sex ed training, as we realized [that] harassment/sexual training was antiquated, boring and ineffective. We also recognize the intersectionality between that and diversity and inclusivity training. We are just getting warmed up!” she promises.

To everyone out there making their voice heard today - we salute you! ❤️❤️ Hope you can join us for our #live #metoosday insta-chat right here on our Instagram feed this coming Tuesday at 6pm PST // 9pm EST! ❤️ We’ll be talking #empowerment and #takingupspace ❤️ #yourvoicematters • 📷: @weheartit

As for her thoughts on womanhood and manhood in 2018: “The rules are changing and it’s awesome! There has been an antiquated, unexamined cultural script handed down to both men and women that hasn’t served either of us well in a very long time. We are getting to rewrite the rules on what it means to be more human and challenge the myopic stereotypes that have kept us all confined by narrow definitions of manhood and womanhood.”

What do you think of Alexis Jones’ work with IATG and ProtectHer? Tweet us @BritandCo.