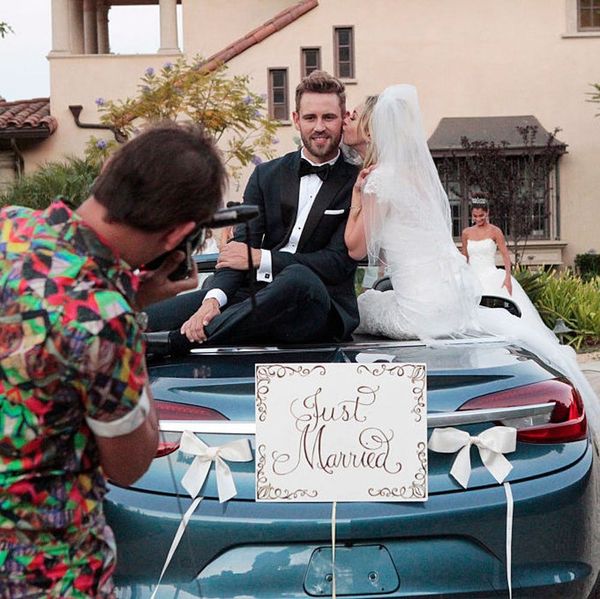 **Warning: This post contains spoilers, so if you haven’t watched the latest episode of The Bachelor, stop reading!**

Ah, another week of The Bachelor, an alternate universe that exists for two hours every Monday night, during which we forget all our troubles and instead focus on troubles of 20-something 20-somethings dating a 36-year-old self-identified runner-up. What a world! Every rose has its thorns, or whatever. Let’s dive in.

Before the dates, Chris Harrison explained that because of the sheer number of women at this stage, it would be “physically impossible” for them all to go on dates with Nick each week, and some of the women looked extremely confused and/or disappointed. Then, the date card said something about bridesmaids. A wedding-themed date this early!? Off to a FANTASTIC start!

How the heck am I supposed to recognize Left Dolphin without her suit? #TheBachelor

Back at the house, when the women started to discuss how Corinne had kissed Nick, Liz said, “I didn’t kiss him… last night.” It was pretty obvious what she meant, but no one picked up on it somehow? Anyway, Brittany and Nick wore leaves and made out with an apple while Corinne looked on. Then, during the pool wedding shoot, Corinne took her top off while the other women covered their eyes, and even Nick didn’t know what to do with his hands! She won extra time with him, including more photos.

During the ~sexy nighttime~ part of the date, the camera kept zooming in on the rose. Nuance! Subtlety! Not on this show. They wanna smack ya in the face with it all, and TBH, I don’t mind. This show is meant to be viewed through wine goggles, and we need all the zoom-ins we can get. Raven showed how honest she is by calling him out on many things, including that he had glitter on his nose. She’s not afraid to go there! Back at the house, Danielle got the first date card, and Liz was totes cool with it.

I love that he picked Danielle for the first one on one bc it means I got ten points in my fantasy league. #TheBachelor

Corinne kept stealing time with Nick, solidifying her spot as the Season Villain. She then gave a Bachelor 101 speech about how to do The Bachelor, and the women were NOT having it. However, even though Nick had seemed relieved whenever someone stole him back from Corinne, he gave her the rose for some reason, destroying the internet’s faith in him — especially after she said “XOXO Gossip Girl” while holding the rose like it was an award.

Corrine got the rose? Maybe time to boycott this season #TheBachelor

In hopes of redeeming himself from the Corinne fiasco, Nick then took neonatal nurse Danielle M. on a one-on-one date. They started by landing a HELICOPTER on a YACHT in NEWPORT BEACH. Sigh. They ate some cheese because they’re from the same hometown in Wisconsin. Okay, whatever. Back at the house, however, Liz revealed to Christen she was at Jade’s wedding and that she and Nick hooked up(!!!). Christen takes it all in stride (wearing multiple outfits, so clearly it’s a lengthy conversation), so we’ll see when it’s revealed to the others.

Danielle is so great that I'm not even going to refer to her with her last initial. Sorry not sorry other Danielle. #TheBachelor

Apparently the daytime part of the date was boring, because they edited it straight to dinnertime. Nick got pretty candid about his prior attempts at Bachelordom, and Danielle was ready to listen. (Also, can I just say that Danielle has great hair, and they don’t pick enough women with short hair for this show?) Then Danielle opened up to Nick and told him that she was engaged, and her partner had overdosed — not only that, but she hadn’t known about his addiction, and she’d found him when it happened. The conversation was a serious one, and it felt more real than the typical Bachelor conversation about the past — if only just a bit, given that addiction and trauma are deep issues and their talk was brief, so they’ll need to discuss this much more in depth for him to understand what she went through. Needless to say, she got the rose.

Lol, okay. Nick took the women to the Museum of Broken Relationships, because he’s really leaning in to the whole “I’m bad at this” thing. But he also may be the first Bachelor to go on a date to a museum, so points for that I guess! Then we hear what is clearly a staged breakup in the other room, and the women seem to think it’s real… until they’re told they have to break up with Nick as part of a live installation.

Nick is pretend breaking up with a bunch of people he will probably break up with. #TheBachelor

Nick says, “Today’s date is all about the art of communicating while breaking up.” Smart that he wants to teach them how to break up — it’ll make his job easier! Unfortunately, it seemed like a mash-up of the worst improv class you’ve ever seen AND the worst breakup(s) you’ve ever seen. However, the women all loved it — especially Josephine, who REALLY went for it.

Liz, of course, went last — and she took a notebook up with her. It was awkward AF, and no one seemed to understand what was going on. The other women nervously laughed and asked, “I’m confused, are you two still dating?” to which Nick replied, “Umm, I’m not sure?” Three things were clear — Liz is a little extra, she should’ve saved that conversation for a later time, and Nick was not happy with her.

Nick then got to know some of the other women during the cocktail party, and seemed to move past the awkwardness of earlier. Then — SHOCKER — Jaimi told Nick that she had dated a woman in the past, and he didn’t seem phased by it at all. This is actually a huge deal, because it makes her the first contestant to openly have had a same-sex relationship in the past — we don’t know yet whether she identifies as LGBTQ, but it’s still fantastic that she was open about it on the show.

Just after this refreshing revelation, Christen brought us all back down to earth by calling Nick out on the Liz sitch. He was not pleased — but come on, she just told everyone that it happened a mere hours ago and they basically overlooked it completely like Westworld robots! Nick basically just said, “Yep, that’s real, that happened, that’s fair,” and sat down with Liz to talk. He wasn’t happy at all, and Liz laughed nervously. He asked again, “Why didn’t you call or text me?” TBH, I’m STILL not buying it. She said she doesn’t like phone conversations but she wants to be on TV? No, babe. No. Nick seemed to agree, however, and sent her home.

Nick then went back to the women and told them that he’d met Liz at Jade and Tanner’s wedding, that they had slept together, and BOOM — episode over. No rose ceremony, no nothing. We did get some wonderful Alexis bloopers, though, in which she sang Happy Birthday to her boobs! What a delight.

Honestly, who can tell what the future holds for this group. By the previews, they seem pretty shocked by Nick’s admission, but the thing is, he was honest with them about Liz and sent her home, so I don’t see what they’re mad about. That he’s had sex before? Whatever. Maybe that he didn’t tell them sooner, but when would it have been a good time? This is only the first week, and he hadn’t gotten a chance to talk to her yet — it seems a little strange to me, and I bet it’ll blow over quickly. Maybe someone will go home because they can’t get over it, but I doubt it. We’ll see what happens next week!

What did you think of this week’s episode? Tweet us @BritandCo!

Rosemary Donahue
Freelance Editor at Brit + Co. Freelance writer everywhere. I like my dogs more than I like most people.
Pop Culture
More From Pop Culture