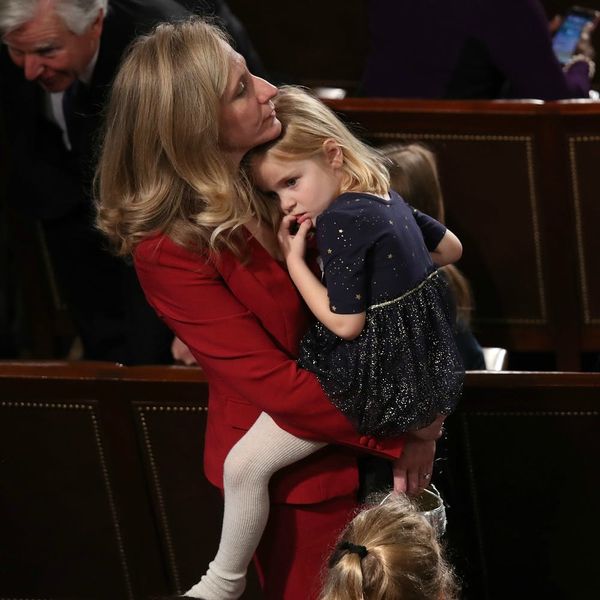 2019 is ushering in so many changes to Capitol Hill. With more than 100 women now in the House of Representatives — in addition to greater diversity in race and sexual orientation — Congress is looking more like a snapshot of American demographics, and less like an old boys’ club. And with the average age of Congress dropping a full 10 years (down to 47 from over 57 years old), more legislators have small children and babies.

During yesterday’s first session in the House, new and returning members filled the floor with their families. With Rashida Tlaib’s sons dabbing during her historic first vote, and new dads holding their babies while swearing their oath of office, it’s clear that the face of politics is changing. And with the number of mothers with young children more than doubling, the changes these women are making in Washington are sure to have an effect on working parents everywhere.

According to Working Mother, prior to the election, fewer than a dozen working moms with children under 18 were part of congress. As of yesterday, 13 more working moms have joined them. But Congress is somewhat prepared. A newly created daycare has been built just steps from the capitol, and it was created specifically to serve the babies, infants, and toddlers whose parents are working long days in the legislature.

But beyond daycare facilities, balancing responsibilities can be a struggle for new members of Congress, particularly single mothers like Tlaib and California’s Katie Porter, who told Politico in November, “Congress wasn’t built for people like me.” Porter’s three children, ages 12, 10, and seven, will be staying in California full-time while Porter commutes back and forth. A survivor of domestic abuse, Porter is using the bulk of her salary to pay for round-the-clock care up to four days a week while she works in Washington.

As she explained to Politico: “For those of us who have young children, which is a minority, there’s definitely the built-in assumption of a two-parent model… There is no template for how to do this in my situation as a single mom.”

And although mothers are still in the minority in Congress, their presence is already effecting change. Along with more accessible child care, nursing stations are being built into Capitol buildings, and there are plans to change the House schedule entirely so that mothers and fathers are more available for their children during evening meals and on weekends.

“We don’t want to have divorces or kids who are dropping off the edge in school,” Representative Debbie Wasserman Schultz said in an interview regarding the schedule changes in 2017. “Your family is always your number-one priority. And you can structure your schedule, I tell members, around your life to make it work. It just requires a lot of organization and a lot of family cooperation.”

The influx of women is also changing how campaigns are run. Liuba Grechen Shirley, a candidate for New York’s 2nd District, may have lost her election, but she won the right to use funding from her campaign contributions to help pay for child care — an expense previously regarded as falling under “personal use,” and thus forbidden to be paid for with campaign finances. But the FEC ruled that Shirley’s child care need was a direct result of her campaigning, allowing her to use some of her donation money for her run at office.

But it’s not just changes to how politicians work that the women in congress are bringing. Research shows that electing women in general changes the very structure of the political landscape for the better. According to Vox, when women are in power, they create more bills, pass more laws, and send more money directly to their communities.

Political scientist Michelle Swers told Vox last year that her research shows that when women are elected, they focus on women’s issues, which in turn have a positive outcome on laws, community, and the country overall. “Women in Congress are just more likely to prioritize issues that have a direct connection to women — violence against women, family leave policy, those kind of things,” Swers said. “The more you can directly connect the consequence to women, the more you see female legislators getting involved.”

And with Congress stepping up to meet the demands of the women and men with children, there could be greater incentive to bring those provisions to the greater public. We already have evidence that policies designed to help moms succeed in the workforce greatly benefit the community at large: A 20-year study out of the province of Quebec in Canada found that Quebec’s provincially-funded child care scheme has not only paid for itself (working mothers have added so much to the economy that the program has a zero dollar cost to taxpayers, in balance), but the province’s economy is one of the strongest in Canada.

“I’ve thought about it a lot. … How are we going to make it work?” Porter told Politico about the child care struggle she’s trying to right with her new job. “It’s an additional, significant … cost for me. But I think part of it is: If we don’t have voices like mine, trying to figure out how to do it — to juggle and serve — then we won’t have anyone else speaking up to try to improve the system.”

Kat Armstrong
Kat has been a writer, social media maven and mom for longer than she's willing to admit. She's also spent time in front of and behind the camera, interviewing celebs, politicians and acting as a producer for fashion and artistic photography shoots. When she isn't writing for various orgs and publications, she's hanging with her kids, husband and French Bulldog, Peter, in Toronto, Canada.
Career
Politics
Career Politics
More From Politics