The New Scary Reason Overeating Is REALLY Bad for You 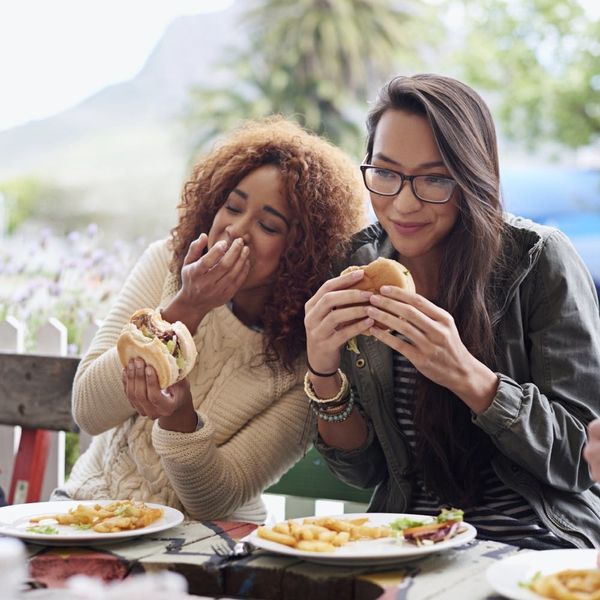 In the name of feeling strong, fit and awesome in our own bodies, we’ve committed to eating healthy (think: seagan diet), and have fit in our exercise the fun way: by enjoying summer activities. Oh yeah, and we’ve kicked some major booty during our total body workouts, even though it’s hard not to chow down (even on healthy stuff!) after. And nothing is more frustrating than putting in serious work during your summer sweat sesh and not seeing any results. Well, a new study is giving us some answers as to why that stubborn extra weight won’t stay off for good.

Researchers at Thomas Jefferson University, led by Dr. Scott Waldman, discovered a new way the gut senses how much food a person eats and how that information is relayed to the brain that might give us some clues on how to stick to a healthy diet. While studying colon cancer, Dr. Waldman and his team noticed that a hormone called uroguanylin appeared to play a role in obesity. The hormone is meant to send a message to the brain, saying, “You’re full — stop eating.” Dr. Waldman noticed that in non-obese mice, uroguanylin would travel to the brain, where it produced a feeling of fullness, but it wasn’t clear if this process happened to obese mice.

To find out, the team performed a new study, where they looked at mice who were overfed. They saw that the small intestines of these mice stopped producing uroguanylin — even though the receptors for the hormone in the brain were intact. When the animals were put on a diet, the uroguanylin production resumed. This suggests that overeating, not obesity, causes this (very useful) hormone production to shut down.

“It didn’t matter whether the mice were lean and overfed, or obese and overfed — urogaunylin production stopped in both groups of animals when they got too many calories. So in this case, it’s not the obese state that’s causing the problem but rather it’s the calories,” says Dr. Waldman.

Additional research on the cells in the small intestine that produce the hormone was done to find out how overeating shuts off uroguanylin production. “Taken together, these experiments show that excess calories — either from fat or carbohydrates — stress small intestinal cells so that they stop producing uroguanylin, which helps people feel full after eating,” says Dr. Waldman.

Additional studies will need to be done to find out how many calories is too many and exactly what molecular sensor makes the decision to shut off the production of uroguanylin; however, this discovery could be an important component of therapy that can be used to reverse obesity.

Kelsey Nelson
Kelsey Nelson is a born-and-raised Ohioan living life in South Carolina. She thrives at binge watching Netflix, contemplating what to order at the bar and running any trail or road she can get her feet on. In addition to being a Brit + Co contributor, she writes about southern pleasantries, DIY mishaps and more at North Living South. If she isn’t writing or running, she’s off adventuring with her husband Brad and their Lab/Dachshund mix, Gordy.
Diet
Health
Diet Healthy Living science study
More From Health