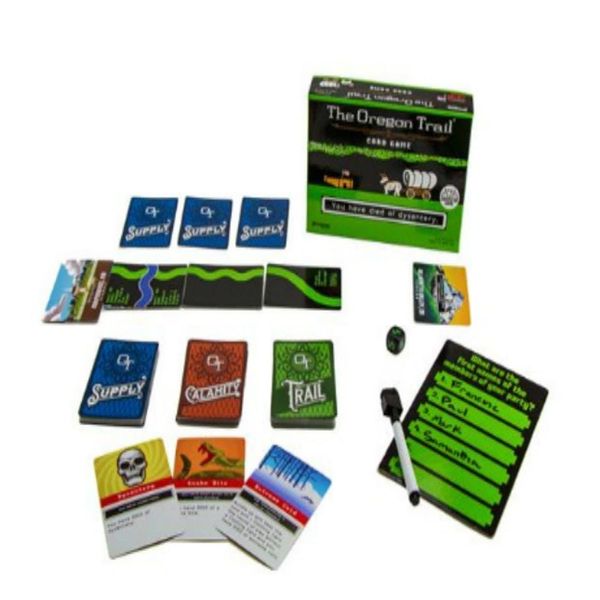 If you’re anything like us, your introduction to the wide world of computers was a unique and exciting time with moments and experiences never to be replicated. Moments like… maybe your first time dying of dysentery on the Oregon Trail! While it all sounds a bit, well, abysmal now, back then, it was actually — dare we say — fun?

A far cry from the technology of today, which possesses the ability to read human emotion better than we ourselves can, our comp days of yore included this black and green text screen screen that operated a bit like a choose-your-own-adventure style novel. More often than not, it ended in your virtual death, or, at the very least, the loss of your virtual family. We weren’t the only ones, apparently: The game became so popular it was actually featured in the world video game hall of fame!

But what if we told you those fond, fond moments can be relived after all (sort of)? Thanks to Target and the Pressman Toy Company, as of tomorrow, you’ll be able to take home the Oregon Trail you remember for your playing pleasure, for just $15.

The catch? It’s now a board game for you and up to six of your closest friends and family. The premise is essentially the same: Make it to the other side of the trail while trying not to die along the way. But between those rattlesnakes, that whole starvation thing, dead oxen and broken bones, the odds aren’t exactly stacked in your favor, even WITH the help of your fellow players. Just like back then, you’ll need to employ your powers of sense to ever make it out alive.

Are you stoked to see this old school favorite back on the scene? Let us know over @BritandCo!

Nicole Briese
Nicole is the weekend editor for Brit + Co who loves bringing you all the latest buzz. When she's not busy typing away into the wee hours, you can usually find her canoodling with her fur babies, rooting around in a bookstore, or rocking out at a concert of some sort (Guns N' Roses forever!). Check out all her latest musings and past work at nicolebjean.com.
Games
Entertainment
Games Nostalgia
More From Entertainment