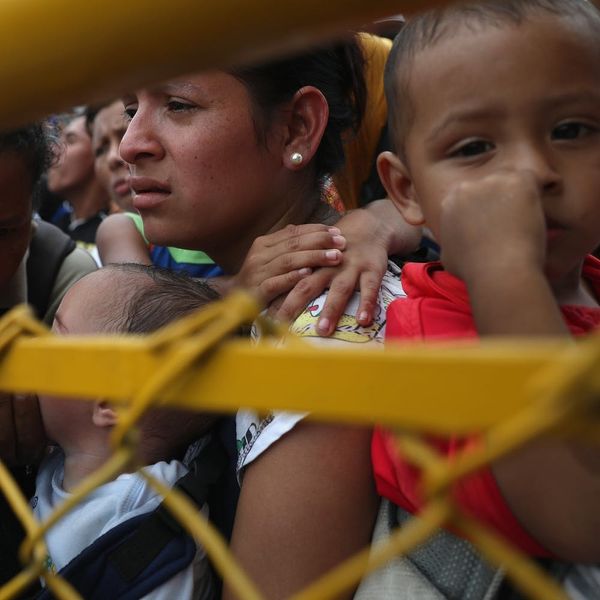 Last week, Kirstjen Nielsen, the Homeland Security Secretary, testified once again in front of Congress in an attempt to justify the federal government’s ongoing actions against undocumented people at the border. Among her assertions, Nielsen said that the chain-link enclosures used to hold undocumented children could not really be described as cages, and that some parents who had been separated from their children at the border were subsequently deported without their kids. These grim updates to the Trump administration’s “zero-tolerance” policy of immigrant family separation shortly preceded a report from the New York Times that revealed the extent to which family separation remains ongoing — despite a federal judge’s order to halt the practice some nine months ago.

“The latest data reported to the federal judge monitoring one of the most controversial of President Trump’s immigration policies shows that 245 children have been removed from their families since the court ordered the government to halt routine separations under last spring’s ‘zero tolerance’ border enforcement policy,” reads the March 9 Times report.

The Texas Civil Rights Project (TCRP) reports that the total number of immigrant children removed from their families since the summer of 2018 may be even higher. In the six months after Trump issued an Executive Order to end the practice, the organization interviewed nearly 10,000 immigrants and asylum-seekers who entered US border custody at or near McAllen, Texas. Through that process, the TCRP identified 272 adults who said they had been forcibly separated from one or more children under the age of 18.

“The government has admitted what we’ve known for months: they never stopped separating families who came to this country seeking safety,” Efrén C. Olivares, the Racial and Economic Justice Program Director at Texas Civil Rights Project, said in a statement made available to us. “The Trump Administration has tried every strategy it can think of in our courts to continue taking children away from their parents, with no transparency about how these decisions are made, no plan to reunite them, and no accountability.”

According to the TCRP, among the 272 adults they spoke to who said they had been separated from child family members, 38 were parents or legal guardians who reported being separated from a total of 46 children were separated. 25 of these children were reportedly under the age of 10.  The youngest infant impacted was 8.5 months old at the time of separation from her mother.

The TCRP report recounts an interview with a father who was allegedly separated from his seven-year-old son because of a misdemeanor conviction for battery over 10 years ago. Another father was reportedly separated from his one-year-old daughter and nine-year-old son on “uncorroborated allegations of gang affiliation.” A woman, who fled her country because she was being held captive as a sexual slave, was reportedly separated from her child because officials said she was “a danger to society and unfit to be a parent” after they learned she had shot her captor non-fatally in self-defense. The list goes on and on.

According to NBC News, immigration officials can separate children “if the adult is not the parent or legal guardian of the child” and “if the safety of the child is at risk or because of ‘serious criminal activity’ by the adult.” Legal recourse can be limited for these parents.

But there is hope. Earlier this year, we reported that several law firms including the Southern Poverty Law Center have filed a lawsuit on behalf of 10,000 detained immigrant children due to allegations of unfit facilities, illegal prolonged stays, sexual abuse, and much more.

On March 8, in a promising victory for undocumented families, US District Judge Dana Sabraw ruled in favor of a separate lawsuit by the American Civil Liberties Union (ACLU) against the Trump administration and said that “all migrant families separated during the government’s border crackdown should be included in a class-action lawsuit,” the Texas Tribunereports.

“The hallmark of a civilized society is measured by how it treats its people and those within its borders,” Sabraw wrote in a 14-page ruling. “That Defendants may have to change course and undertake additional effort to address these issues does not render modification of the class definition unfair; it only serves to underscore the unquestionable importance of the effort and why it is necessary (and worthwhile).”