This Party Game Helps You REALLY Get to Know Your Friends 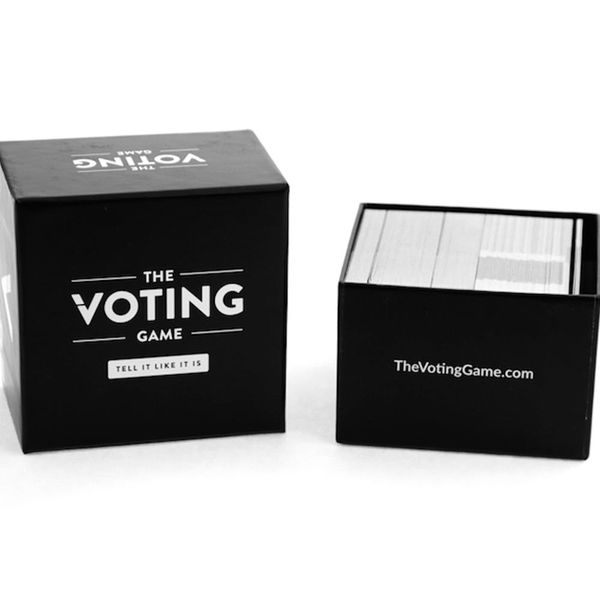 Most would agree that Cards Against Humanity is the reigning champion of all adult card games, but there’s a new challenger coming to town. The Voting Game is a party game that will help you discover hilarious truths about your friends and family by asking the questions you’ve never thought to ask before. Who would survive the longest in a zombie apocalypse? Who would show up to their high school reunion in a Lamborghini rental? By voting anonymously on which player best fits the card’s description for each round, you’ll soon be able to find out what your friends really think of you.

Product designer Tom Rohlf and his pals played the first version of The Voting Game at a music festival, strangely enough. They played with scraps of paper and made up questions as they went. Rohlf continued to work on the game, eventually coming up with a full deck’s worth of questions. He then shared his creation with the tight-knit Kickstarter community, and thanks to over 400 backers and more than twice the amount of his $7,500 goal, the project has been backed. Wowza!

Similar to Cards Against Humanity, Rohlf is also releasing three expansion packs. Two packs (“Create Your Own” and “Fill in the Blank”) give the game a customizable feature while the third (“NSFW“) adds a raunchy element to it. No matter which one you choose to try out, it’s sure to be a popular addition to the already-amusing deck.

The actual Kickstarter project will be funded on August 18, but there are currently free limited PDF downloads of the game and the expansion packs available on The Voting Game’s website. So why not throw an impromptu party and try it out? Grab some chips and salsa and call a few friends over and you’re bound to have a great time.

What questions would you want to see as a part of The Voting Game? Share them with us in the comments below!

(Photos via The Voting Game)

Sonia Rao
Sonia is a determined, television-obsessed gal on a quest to find the best cinnamon waffles recipe out there. If she isn’t researching the latest fashion trends or avidly crafting, you can catch her curled up on the couch with a few (meaning a billion) cookies, watching the hilarious antics of Leslie Knope or Mindy Lahiri. Sonia loves writing for Brit + Co as much as she loves desserts, and is equally proud of her quirky, pop culture reference-filled Twitter feed.
Kickstarter
Home News
Kickstarter
More From Home News