10 Badass Women Who Rocked the Red Carpet in Suits 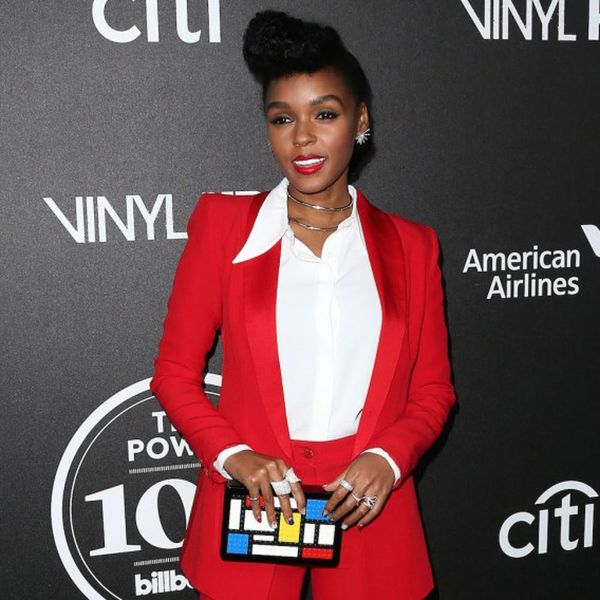 As awards season draws to a close and we eagerly await the most prestigious ceremony of all, the Academy Awards, we can’t help but look back at the last year’s biggest fashion moments. From the Golden Globes red carpet to the Grammy Awards red carpet, we saw countless beautiful gowns, as well as some eye-catching pantsuits. The idea of taking sartorial pointers from the boys and suiting up (while maintaining a few feminine touches) has been a steadily rising trend over the past few years, and these 10 actresses, songstresses and models have really mastered the art of red carpet power dressing.

The Danish Girl, Heard stole the show in this jacquard satin tuxedo from Dolce & Gabbana. The understated makeup (we love a nude lip!) and messy bun help tone down the tux’s fierceness while the classic black heels add the perfect touch of femininity. (Photo via Jason Merritt/Getty)

2. Kate Moss: If there’s one fashionista who knows how to pull off effortless glam, it’s supermodel Kate Moss. By pairing a simple black suit with an oversized gold bangle, strappy heels and see-thorough blouse, Moss showed off the perfect balance between sexy and powerful at Milan Fashion Week. (Photo via Tullio M. Puglia/Getty)

4. Angelina Jolie: Can Angie do any wrong? No, no she cannot. Jolie had fashionistas going wild when she showed up at the British Academy Film Awards in this perfectly fitted black suit, paired with killer heels and an undone silk bowtie for added cool. (Photo via Chris Jackson/Getty)

5. Emma Stone: If a two- or three-piece suit feels too extravagant, take a cue from Emma Stone’s show-stopping Lanvin jumpsuit. Trading in a button-up and blazer for a gorgeous embroidered bodice and tying a beautiful sash around her waist, which almost looked like a train, Stone left us speechless at last year’s Golden Globe Awards. (Photo via Jason Merritt/Getty)

6. Janelle Monae: Giving Carey Mulligan’s powder blue suit a run for its money is Janelle Monae’s Cristiano Burani two-piece. The songstress is known for her love of simple black tuxes, so when she arrived at the 2016 Billboard Power 100 Celebration wearing this unexpected pop of color, our jaws dropped. Bonus points for the fun abstract clutch, which is giving us major Piet Mondrian vibes. (Photo via Frederick M. Brown/Getty)

8. Anna Kendrick: For any occasion when being daring is the name of the game, pair a well-tailored suit with heels and nothing else. As Kendrick showed the world at the 57th Annual GRAMMY Awards: No shirt = No problem when you’re exuding this much confidence. (Photo via Larry Busacca/Getty)

9. Zendaya: As an ode to the late David Bowie, Zendaya arrived at this year’s GRAMMYs with a faux mullet (we’re still deciding how we feel about it) and a wide-legged, double-breasted suit from Dsquared2, which transported us right back to the ’80s… and we loved every minute of it. (Photo via Jason Merritt/Getty)

10. Charli XCX: “Go Big or Go Home” must be British beauty Charlotte Emma Aitchison’s mantra. The 23-year-old pop star stunned at the 2015 GRAMMY Awards with a white three-piece suit, pink bowtie, sparkly heels and oversized fur shawl. Something tells us she and Lady Gaga would be the best of friends. (Photo via Jason Merritt/Getty)