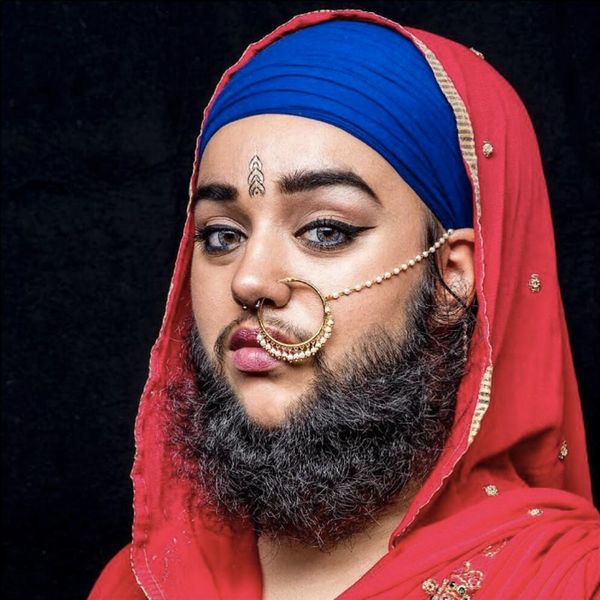 When Adele was pregnant back in 2012, the extra androgens her body was producing (a totally normal and common thing during pregnancy, BTW) caused her to grow extra hair — on her face. Being Adele, she wasn’t shy about the whole thing. “’I only cropped it last night,” she told an entire stadium full of Scottish fans in 2015, adding, “It’s actually true. I’m not telling a joke. I actually have a beard, but I’m proud of it. I call it Larry.”

For other, non-Adele types, unwanted facial hair is something you might only talk about with your BFF (as opposed to all of Glasgow). And the lengths that some people go to get rid of it — through bleaching, electrolysis, laser and pulsed light machines — are painful or super expensive or both.

After years of traumatic waxing treatments, Model Harnaam Kaur refuses to continue to subject her face to any of the above. She’s 26 now, but because of the hormonal disorder polycystic ovary syndrome, Kaur began to grow facial hair when she was only 11.

I don't pay attention to the world ending. It has ended for me many times, and then begun again in the morning! 🙏🏽💯💥 Don't dim your lights just because they shine in someone elses eyes! You were born to sparkle, be vibrant, exude love and confidence! 💗💘💛💜💚💖 Remember, regardless of what people say, you were born to be fabulous my darling! 👸👨 I had to repost this image because DAYAAAMMMMM i look fine!! I look gorgeous 😍😍

Growing up, she was bullied and excluded by other kids. She thought about suicide and as a teenager, she began to self-harm. “I wanted to punish my body for looking this way. I wanted to hurt it.” She dreamed of being a model (Harnaam grew up watching Tyra Banks reign over ANTM), but it seemed impossible to her.

Everything changed when she made the decision to stop waxing her facial hair.

Kaur walked her first runway in 2016. She’s currently signed to Parisian agency Wanted Models and has added spokesperson, body confidence activist, anti-bullying activist, life coach to her CV. Her latest win? Landing a campaign for a gender-neutral hair elixir made by Captain Fawcett.

“The bearded world can be dominated by men,” she says in an interview with Mic. “I stand as a bearded lady breaking barriers and standards about what male or female traits are. This oil is universal.”

STOP PRESS: I want to celebrate the launch of my Hair Elixir😍❤️🌺🌹 I have collaborated with the esteemed @captainfawcett , on my very own delectable and rejuvenating Hair Elixir. 💃🏻🕺🏽💈 A golden and rarefied blend of four nourishing and smoothing base oils, Sweet Almond, Tomato Seed, #Argan and Broccoli Seed. Your hair is assured of intense nourishment whilst aiding cuticle repair. This simply spiffing hair tonic contains a rather spectacular blend of aromatic essential oils: West Indian Bay Pimenta Racemosa, Black Pepper Piper Nigrum, Labdanum Cistus Ladaniferus, Cedarwood Cedrus Atlantica, Cinnamon Leaf Cinnamomum Zeylanicum, Vanilla Vanilla Planifolia and Lime Citrus Aurantifolia. This incredible universal oil is ideal for use on both head and for those fortunate enough to be hirsute of chin... your beard hair. The Bearded Dame Hair Elixir: £28.00. Image - @iaincrockart

For Kaur, acceptance and body positivity doesn’t mean that everyone has to follow in her bold footsteps. “I live by the phrase ‘My body, my rules,’” she told The Guardian. “If keeping your hair makes you uncomfortable or depressed, then get rid of it; otherwise, if you’ve got it, rock it.”

Have strong feelings about facial hair? Tell us about it on Twitter!

Corrina Allen
Corrina Allen is a film + television + travel writer from Toronto. Her journalistic goals include a backstage interview with David Byrne, the fictional character she identifies most closely with is John Wick, and her favorite dead person is Vladimir Nabokov. She never, ever Instagrams photos of her food (just her dog).
Body Positive
Diversity
Body Positive inclusivity