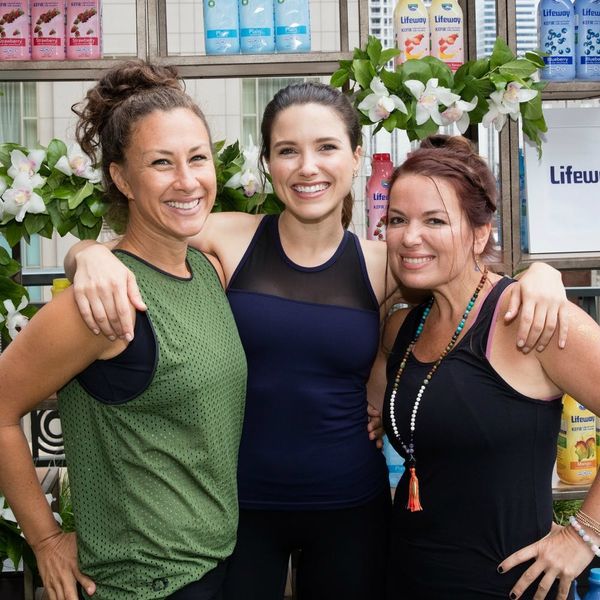 Actress, activist and eco-goddess Sophia Bush and Julie Smolyansky (AKA the CEO of Lifeway Foods, who became the youngest female CEO at a publicly held firm when she took over at the age of 27 — #girlboss) are busy ladies. REALLY busy. The kind of busy that makes your head spin.

As an actress working 14 hour days on NBC’s hit show Chicago P.D. (which is currently filming its fourth season) and an ambassador for Glamour’s ever-expanding The Girl Project, which works to educate young women around the globe, it’s rare Sophia gets a moment to just be.

The same goes for Julie — in addition to running a company that boasts an annual revenue of upwards of $130 million, she is also the mother of two girls.

But recently, we got to hang with the two as they carved out some time for themselves — and each other — to join Dawn Bianca Feinberg (Dawn B Yoga) for some early morning yoga at Chicago’s picturesque NoMI Garden Park Hyatt overlooking the city.

The relaxing atmosphere was just what the doctor ordered. It was also a good reminder for Sophia, who has “more things scheduled in a day than are possible to get done,” to slow down. For Julie, a figure skater for 16 years (she started at the age of 5) who has struggled with her own body image issues in the past, it’s a chance to set her positive intentions for the day and focus on the good.

It also takes care of their workouts for the day — two birds, one stone!

But what about the other days? You know, the ones when their schedules are so jam-packed that they can’t even think straight, let alone find an hour to hit the gym? How do these babes find the motivation — let alone the time! — to stay so, well, babely?

“Can someone please share [the answer] with me?” Sophia joked before going on to say that for her, changing her mindset with regard to her workouts has been key. She’s a big advocate of doing what makes you feel good, and not pushing yourself beyond your own limits. It makes sense: After all, if you don’t loathe your workout, you’re more inclined to actually, you know, do it.

“If it doesn’t feel good, I don’t do it,” she said. “I’m not a fitness model” (though we’d be inclined to disagree after a quick glance at her arms — girl has some SERIOUS definition!). “If someone says ‘drop and give me 60,’ no. [If someone says], ‘Run ‘til you puke,’ NO! I don’t have this obsessive need to finish [a workout].”

As for Julie, who has been known to work out up to six hours a day (dayum, girl!), it’s more about knowing when to pull back. While she can easily become addicted to the rush from the endorphins she gets from working out, these days, she’s much kinder to her body, and for good reason. “I have to say what really inspired me was having my daughters,” she said. Admitting that she’d be “so sad” if her girls were as hard on themselves as she is on her own body has allowed Julie to open herself up to self-love in a whole new way.

But acceptance doesn’t mean letting fitness fall to the wayside! In fact, Julie views health as an investment into our own strength, which can then be put into all of the things that mean the most to us, from our families to our careers to our passions — passions like that of Sophia’s for bettering the lives of others.“Give back!” she said excitedly. “Do it now; do it always!”

Consequently, both women are constantly finding new ways to incorporate health into their lives, whether that means simply going for a walk while making business calls, throwing on a quick YouTube video, like those found on Dawn’s yoga channel, or getting some quick exercises in at home — or wherever they may be.

Having both just returned from the Democratic National Convention, Sophia said that “squeezing it in” is still something of a work in progress. “I brought my gym shoes with me… and I never took them out of my bag,” she shared. Now, she’s looking for tips from her roommate Jenny, who travels frequently for work, as her morning routine of 30 squats, 25 push-ups and 50 sit-ups seems to be working wonders. “Her body looks amazing!” she says.

The women are also both careful to incorporate balance into their meals. As the CEO of Lifeway, Julie is all about her brand’s kefir (described as a “cultured milk smoothie high in protein, calcium and vitamin D) products, incorporating it into just about whatever she can, while Sophia, who is a foodie through and through, tries to save her meal splurges for food that is *truly* deserving.

Case in point? Rather than noshing on the chips, donuts and mac and cheese she says are always on set (none of which make her feel stellar), she’ll keep her own snacks on hand and hold out for something far more tantalizing “that’s truly delicious, like hand-rolled pasta — that’s worth it to me,” she says.

And if she does have (gasp!) a larger-than-normal dinner? So be it. “Who cares,” she says. “Good for me! I don’t think it’s possible to [always] live any one way.”

Do you relate to Sophia and Julie’s work-health balancing act? Share with us over @BritandCo!

Nicole Briese
Nicole is the weekend editor for Brit + Co who loves bringing you all the latest buzz. When she's not busy typing away into the wee hours, you can usually find her canoodling with her fur babies, rooting around in a bookstore, or rocking out at a concert of some sort (Guns N' Roses forever!). Check out all her latest musings and past work at nicolebjean.com.
Fitness
Entertainment
Fitness Healthy Living
More From Entertainment

12 Movies That Get Black History Right