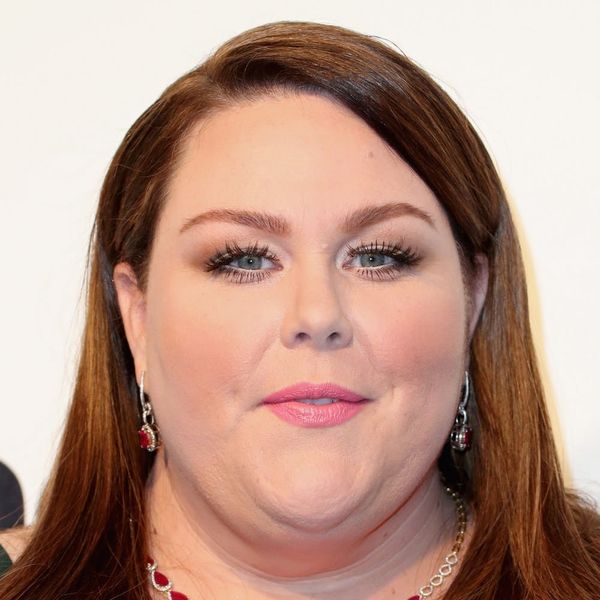 If you’re turning into This Is Us every Tuesday night (as you rightfully should: Season two is coming and it looks AMAZING), you know (and probably love) breakout star Chrissy Metz, who plays Kate. And, while her onscreen character has been known to play with a trend or two, the actress recently stepped outside of her comfort zone for a pin-up shoot for Harper’s Bazaar.

As so many women have paved the way before me, I am simply paying it forward...with the beautiful help of @harpersbazaarus, thank you for the feature and fun! We spend our lives comparing and despairing and possibly never receiving our deserved true happiness. Why is that? Why don't we uplift instead of repress? Why can't we encourage instead of deter? Here's what I know... It doesn't matter where you come from, what your scale currently says or what society has taught you to believe. You are entitled to greatness. No matter what. I say this to you and as a reminder to myself. All of our roads are paved differently. How amazing that we get to share our bumps and detours with one another. We teach the lessons and often times we are the lesson. We learn from them because we are also the students. We are beautiful works in progress and that's more than enough. Start there. When you sit in your seat confidently you allow others to embrace theirs. ❤️️💄💋 Click the link in bio for the full article & details on the amazing artists who helped to create & capture this look.

“When I first heard Harper’s Bazaar wanted me to be sexy, I was like, ‘Who, me?’ I knew y’all were edgy but this is incredible — it’s validation,” she shared. While Metz, who shared the shoot via her Instagram, experienced nerves at the idea initially, she was quick to overcome it. “I can get into this now because I finally have the confidence,” she said.

While having a fashion editorial under her belt is a major milestone for any star, Metz has been cementing her style status on red carpets all awards season long. She donned an eye-catching floor-length sheer maxi to the Critics’ Choice Awards, which she complemented with tousled waves and glam girl makeup.

"There's more room for all of us now—no matter our sexuality, race, body size, gender or whatever else." Read more from our exclusive interview with @ChrissyMetz at the link in our bio. Interview by @MargaretWappler Photography by @LaurenDukoff Styling by @Jordan_Grossman

She largely credits her stylist, Jordan Grossman (also known for dressing Halsey, Taryn Manning, and Sofia Richie, to name a few), for helping her find her look. “She knows what works on me,” Metz told the mag. “She’s given me permission to try different things.”

And the best sign that girlfriend is fast on her way to being a style icon? She doesn’t take fashion (or herself) too seriously. “If I ever end up on the worst-dressed list, it’s not going to make me fall apart,” she said. “I want to look great and feel good and be comfortable, but at the same time, none of this really matters. This is the fun part.”

What DOES matter to Metz is making sure she’s able to serve as inspiration for the plus-size viewers that watch Kate struggle with weight on the weekly. After all, as the 36-year-old tells it, “If you can’t love who you are now, you can’t get to the place you want to be … I’m paving the way for other women and men who know they’re destined for greatness but don’t believe it yet.”

Metz went on to encourage her fellow females, saying, “All of our roads are paved differently. How amazing that we get to share our bumps and detours with one another. We teach the lessons and oftentimes we are the lesson. We learn from them because we are also the students. We are beautiful works in progress and that’s more than enough. Start there.”

What do you think of Metz’s sexy retro-look? Tell us over @BritandCo.

Nicole Briese
Nicole is the weekend editor for Brit + Co who loves bringing you all the latest buzz. When she's not busy typing away into the wee hours, you can usually find her canoodling with her fur babies, rooting around in a bookstore, or rocking out at a concert of some sort (Guns N' Roses forever!). Check out all her latest musings and past work at nicolebjean.com.
Body Positive
Style News
Body Positive Plus Size retro