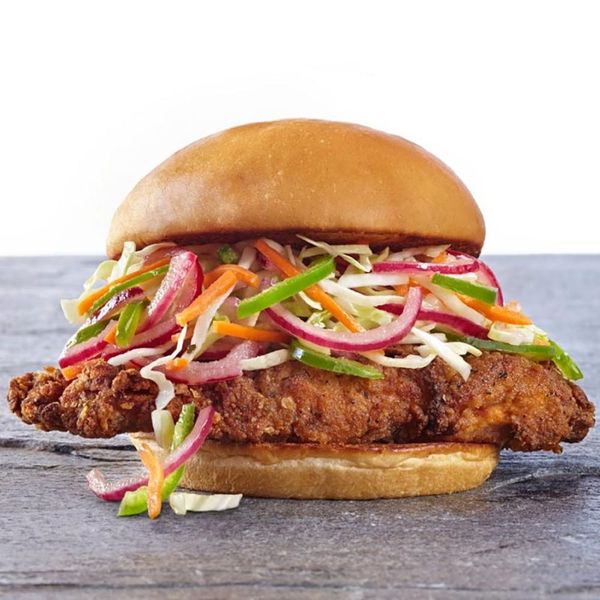 As much as we try to avoid spots like McDonald’s, Burger King or KFC, we’ll admit that when we’re seriously pressed for time and starving, we’ll pull in and place an order. And as delicious as those chicken nuggets are, it’ll definitely put a damper on your otherwise healthy (okay, mostly healthy) diet. But for some lucky residents of Pleasanton, CA, it looks as though their fast food fix can now be a totally organic experience. Introducing: The Organic Coup, America’s first USDA-certified organic fast food restaurant.

You can go ahead and forget your visions of quinoa bowls and boxed salads, because The Organic Coup’s primary ingredient is one you probably wouldn’t expect from an organic restaurant: fried chicken. Similar to the beloved chain, In-N-Out Burger, the menu is super simple, with just three main items: The Coup Signature Sandwich, The Coup Wrap and The Coup Bowl. They also have organic popcorn drizzled with chocolate and caramel as well as organic fountain sodas, organic lemonade and boxed water. All the chicken options are fried in organic coconut oil and paired with spicy shredded veggies.

The Organic Coup only uses Mary’s Chicken (the same chicken that’s carried at Whole Foods), which comes from a farm based in San Joaquin Valley, CA that’s well respected in the health food world for its farming practices.

We won’t say The Organic Coup is an ultra-healthy fast food pick (because, c’mon, it’s still fried chicken after all), but we will say that when you’re craving some greasy goodness, this is probably the best way to indulge.

Would you like to see The Organic Coup show up in your city? Share your thoughts with us in the comments below.

(Photos via The Organic Coup)

Cortney Clift
Cortney is the senior writer and special projects editor at Brit + Co. She typically covers topics related to women's issues, politics, and lifestyle. When she's not buried behind her computer you'll find her exploring New York City or planning her next big adventure.
Fast Food
Food
Fast Food
The Conversation
Reviews:
More From Food