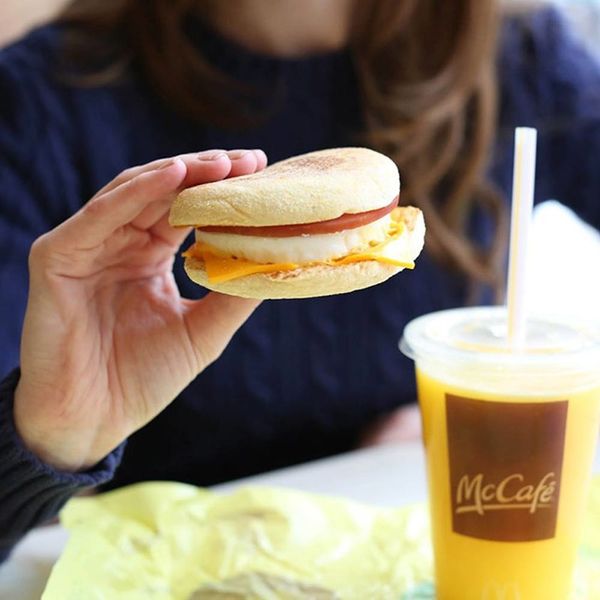 You can probably count on one hand the number of times you’ve made it to McDonald’s in time for breakfast for some hangover cures. And thanks to that frustratingly annoying 10:30 am cut-off, you have more than likely freaked out like Adam Sandler did in Big Daddy more times than you’d like to admit (guilty as charged). Those rage-fueled and tear-inducing mornings appear to finally be coming to an end, as there’s a new rumor circling the web that the Golden Arches just may be expanding its breakfast service to an all-day affair. Okay, now we’re crying tears of joy while holding our McMuffin.

According to the Wall Street Journal, Tucson, Arizona franchisee LeAnn Richards — who, BTW, has the coolest title: task force leader for all-day breakfast — sent a memo to other McDonald’s franchise owners to prepare for an all-day breakfast rollout in October. Breakfast for dinner at McDonald’s could soon be more than a daydream, people! All-day breakfast has been testing in San Diego to see if people aren’t actually all talk and will buy McMuffins, McGriddles, etc. past 10:30 AM, and (duh) people are actually buying those tasty morning meals at all hours of the day. While we assumed the chain was just being jerks about the breakfast menu time limit, the real reason Mickey D’s hasn’t unleashed its pre-lunch menu on us for ages is grill space issues. They do have to make countless Big Macs + Filet-O-Fish, after all. To get to October without a breakdown, we dug up some copycat recipes (we’re kinda big fans of recreating menu classics) because, let’s be honest, you aren’t making it to the fast food restaurant before 10:30 am on a Saturday or Sunday.

1. The McMuffin: Give the AM menu classic an upgrade with this butternut squash + kale homemade version. Add sausage, ham and/or bacon to really kick it up a notch. (via The Miniature Moose)

2. The Cinnamon Melt: Why only buy that small container of cinnamon rolls when you can make an entire English Muffin loaf at home? Yay carbs + cals! (via Foodie With Family)

3. The Sausage Burrito: So *technically* this is a vegan take on the menu item, but how can you refuse this breakfast burrito when it’s packed with potatoes, garlic, fresh herbs and everything else that will make you not even miss that sausage? (via Produce on Parade)

5. The McGriddle: You’re definitely not gonna find a paleo item on McDonald’s menu. Try this take on the McGriddle made with bananas, protein powder, coconut flour and more. We’ll bet you’ll never order the original McGriddle again after this recipe. (via Lexi’s Clean Kitchen)

7. The Hash Browns: Yeah, the fast food joint’s hash browns are irresistible. So is this baked parmesan recipe. Bonus points because they are adorable, bite-sized cups. (via Averie Cooks)

8. The Southern Style Chicken Biscuit: Are you drooling at this maple buttermilk chicken biscuit or is that just us? Pair with some hot sauce to add tears to that drool ;) (via Brown Sugar)

Will you be making any of these McDonald’s breakfast menu items at home before they’re available for fast pickup nationwide? Let us know which ones you’ll be recreating in the comments.