6 Fast Food Menu Items That Are Actually Kind of Healthy 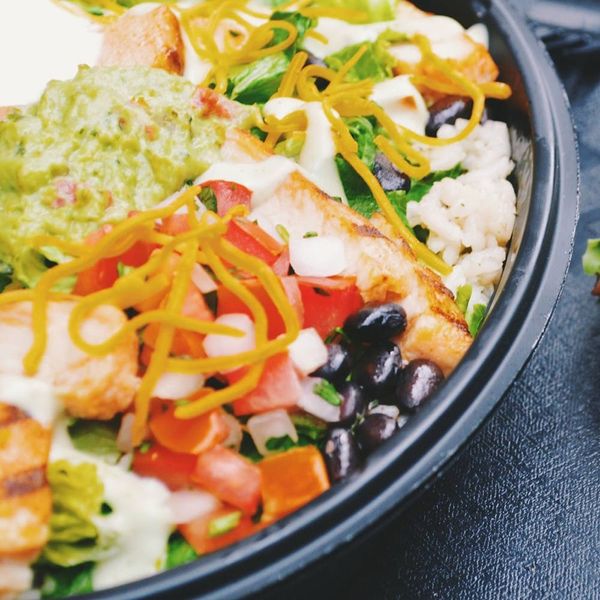 When you put in the effort to eat healthy at work conferences, master healthy eating at the airport and even figure out healthy eating hacks during a bachelorette party, you’re committed. And even though it only makes sense that you’d want to spend your cheat day gorging on some Mickey D’s, you don’t want to totally spoil those smart choices, right? Fast food isn’t the best when it comes to fresh ingredients and nutrients, but sometimes you just NEED to indulge. So when you find you can’t fight those greasy, salty cravings, here’s a list of options from your go-to fast food joints to make sure your treat yo’self day is at least kind of healthy.

1. Chipotle Burrito Bowl: You can order a burrito bowl to save on carbs and calories, but just because your meal is resting on a bed of lettuce instead of a tortilla, doesn’t automatically make it good for you. The cheese and sour cream are where the calories really add up at Chipotle, so load up on extra veggies instead of all that dairy (or let the guac be your indulgent ingredient instead.) You can also give yourself an extra serving of protein by asking for a scoop of black or pinto beans. (Photo via Chipotle)

2. Plain Ol’ Shake Shack Hamburger: Surprisingly, Shake Shack’s vegetarian option, the ‘Shroom Burger, is not the healthiest option on the menu. You’re better off having a standard Hamburger (note: not the ShackBurger, which comes with cheese and special sauce). It’s higher in fat than your standard ground beef patty, but not terrible at 17g. Plus, it’s a good source of protein and low on carbs, and you have the option of adding fresh lettuce, tomato and pickles. For a drink, skip the milkshake (which is practically a meal itself) and opt for unsweetened iced tea — or better yet: water — instead. (Photo via Andrew Burton/Getty)

3. McDonald’s Artisan Grilled Chicken Sandwich: A 20-piece chicken nugget meal might seem like a great deal for the price, but if your focus is on health, the Artisan Grilled Chicken sando is your best bet. The Golden Arches aren’t exactly known for piling on the veggies (and french fries don’t count), but at the very least, you’re getting a good dose of protein that isn’t covered in a ton of breading. (Photo via McDonald’s)

4. Papa John’s Garden Fresh Pizza: Who can say how fresh those veggies really are, but hey, at least you’re getting some greens with all that cheese. Limit yourself to two slices of this vegetarian pie, and really anytime you have pizza; keep in mind that you should try to avoid too much sodium in your other meals that day. (Photo via Getty)

5. Taco Bell Cantina Power Burrito and Burrito Bowl: Taco Bell is another restaurant where you have to be careful about the high salt intake (the potential sodium you could rack up in one meal is nuts). But this new vegetarian burrito is one of few items on the Taco Bell menu that doesn’t far exceed the sodium level recommended by nutritionists. You can try this in both burrito and bowl form. (Photo via Taco Bell/Facebook)

6. Starbucks Protein Bistro Box: If you’re getting anything fancier than a latte at Starbucks, chances are your coffee order is giving you way more than enough sugar already. So, if you’re craving a snack to go with it, avoid the temptation of pastries (mmm, cake pops), and fill up on this neat little 370-calorie package of fruit, cheese and hardboiled eggs instead. (Photo via Starbucks)

Show us your healthy fast food meals by tagging us on Instagram!