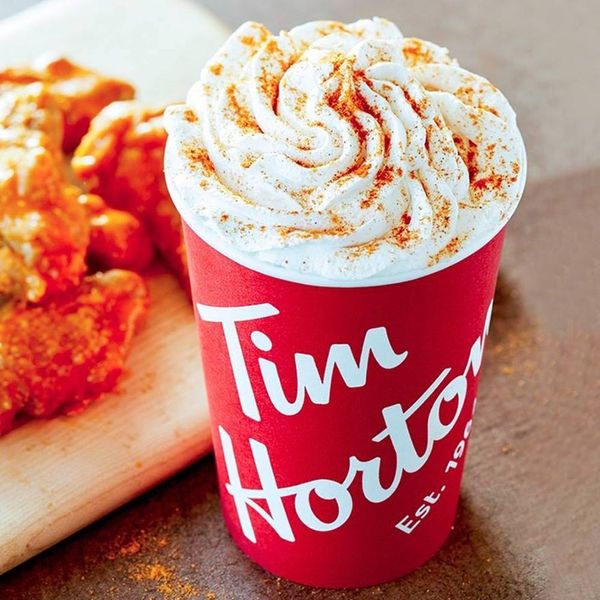 Nothing says fall quite like pumpkin spice treats and… buffalo sauce lattes? Canadian coffee giant Tim Hortons is pushing for just that with the unveiling of its new brow-raising coffee concoction which blends espresso and milk with a huge dose of Buffalo chicken-inspired flavors. Say wut?

Currently being served at the chain’s two Buffalo, New York locations, the latest addition to the newly launched espresso menu (which does include traditional PSLs, BTdubs) is made from “freshly brewed espresso, steamed milk, mocha, and bold Buffalo sauce flavor,” according to a press release. All of that Buffalo goodness is then finished off with a “whipped topping and a dusting of zesty Buffalo seasoning.” How… interesting!

If you’re wondering about the inspiration behind this Buffalo-centric beverage, it’s all about heritage. “Tim Hortons and Buffalo sauce were both born in 1964, so why not take these two Buffalo staples and combine them?” Regional President Stephen Goldstein asked. “The unlikely pairing of sweet mocha and tangy Buffalo sauce come together to create an unexpectedly delicious sweet and spicy treat we hope our guests will enjoy.”

While some folks did indeed enjoy the unexpected novelty of it all, others were left more than a little confused, to say the least.

Okay I love buffalo sauce & I love coffee, but I can't imagine them together 😳 who's up for trying the new Buffalo Latte??? pic.twitter.com/d0rZuLzpZX

@TimHortonsUS the buffalo wing latte was not necessary, nor will it ever be. Don’t ruin a Tim Hortons like that

What dark sorcery is our American neighbors engaging in?

#TimHortons (in the 🇺🇸) has a Buffalo Sauce flavored latte. Does it come with blue cheese, carrots & celery? 🤔 Someone gon get fired 4 dis. pic.twitter.com/3yF4Z6m6YT

If you’re feeling brave enough to try it, you can pick up your very own BSL for just $3 at participating locations (4849 Transit Road in Depew and 3470 Main Street in Buffalo) for a limited time.

Would you try the Buffalo sauce latte? Tweet us @BritandCo.

Barbara Pavone
Barbara Pavone is a pop culture-obsessed writer based in beautiful (but ridiculously cold) Montreal, Canada. When she's not working, she's sipping on a Pimm's Cup and daydreaming about her celebrity hero, Saint West.
Coffee
Food News
Coffee
The Conversation