These 14 Totchos Are About to Replace Your Game Day Nachos 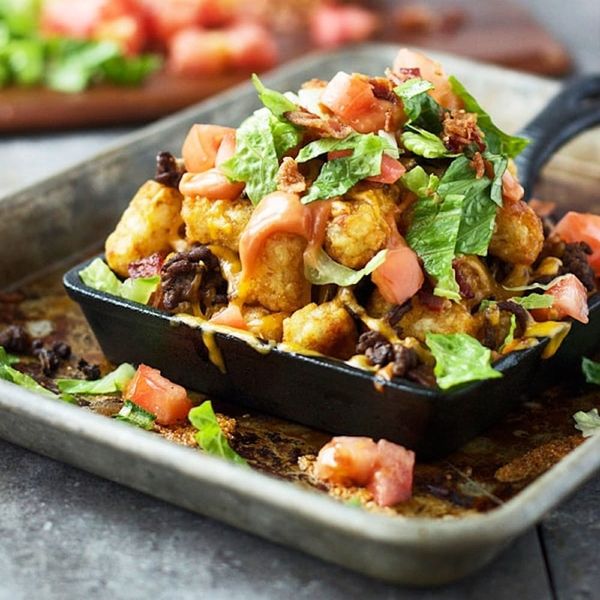 Can you feel it in the air? Tailgating season is *finally* upon us. Soon, you’ll be eating all the sliders and slow cooker dips you want while watching your favorite teams. Nachos may reign supreme, but we can do you one better… totchos. The love child of tots and nachos, totchos are the perfect way to hack a bag of frozen tater tots and please your football party guests. To check out cooking methods and topping options galore, scroll down for 14 seriously delicious totcho recipes.

If you had gotten these pizza totchos for an after-school snack as a kid, you really would have looked forward to getting off of the bus. Customize them according to your favorite toppings or go for a simple pepperoni and mozzarella combo. (via Well Floured)

BBQ, bacon, and creamy cheese sauce were made to be football food. Pile all of those things over a stack of hot tots and garnish with scallions to get game-day ready. (via Cooking on the Front Burner)

Skip making buffalo chicken dip and throw it on some totchos instead. Don’t forget the obligatory blue cheese crumbles and dressing to balance the spiciness. (via Shared Appetite)

If you want to join in on the totcho fun, but you’re living the low-carb life, homemade cauliflower tots are the way to go. They’re easier to make than you think, and even the biggest potato-lover will be obsessed. (via Kirbie’s Cravings)

If you’ve ever ordered a Cuban sandwich, you know how delicious the combination of flavors is. Here, the pork, pickles, and Swiss lend themselves perfectly to the crispy totchos for a mouth-watering munch. (via Take Two Tapas)

Nachos and jalapeño poppers are two *major* tailgating requirements. Instead of going through the trouble of making both, try these totchos that have slices of peppers, bacon, cheese, and a sour cream drizzle. (via I Wash You Dry)

Let your slow cooker do all of the heavy duty work when it comes to these totchos. While the brisket is cooking away, you can be getting your house ready for all the football fanatics that will be taking over your space. (via Buzzfeed)

You’ve probably never thought of putting lamb on top of tater tots before, but there’s a first time for everything. It’s no doubt the star of these Greek totchos, with honorable mentions going to the hummus and feta. (via Country Cleaver)

Don’t think that totchos are limited to just appetizers and dinner. This version may just remind you of your go-to brunch order that’s been piled onto one sheet pan. (via Busy Mommy)

If biscuits and gravy are more your speed, this is the recipe you need to serve on Sunday morning. Just imagine waking up to a skillet of crisp tater tots smothered in gravy, scrambled eggs, and sausage. (via Bobbi’s Cozy Kitchen)

Bacon cheeseburger, meet totchos. You’re probably used to having your tater tots on the side of your burger, but this time, they’re stacked high together with a smattering of secret sauce. (via Cooking for Keeps)

If Chipotle served totcho bowls, this would definitely be on the menu. The perks of making these queso fundido totchos at home means… guac on top isn’t extra. (via A Simple Pantry)

You may not be able to get these in a New York deli, but the flavors hit all of the same notes as the famous sammie. Corned beef, tons of cheese, and Thousand Island dressing are the keys to making these Reuben totchos shine. (via An Affair from the Heart

Thankfully, sweet potato tater tots are just as easy to get ahold of as classic tots. Offset their sweet flavor with spicy chipotle aioli, sliced jalapeños, and dollops of guacamole and sour cream. (via Climbing Grier Mountain)
From Your Site Articles
Paige Johnson
Paige is a blogger, food writer and culinary master from Louisville, Ky. She's a newlywed who's obsessed with dogs and renovating her 117 year old home. When she's not working on her blog — My Modern Cookery — you can find her binge watching F.R.I.E.N.D.S with a triple shot latte in-hand.
Dinner Recipes
Appetizers
Dinner Recipes recipe roundup
The Conversation
Reviews:
More From Appetizers

Get Creative In The Kitchen With These Small Bite (and Adorable!) Recipes