This Triple Threat Potatoes Recipe is Baked, Mashed, and Fried! 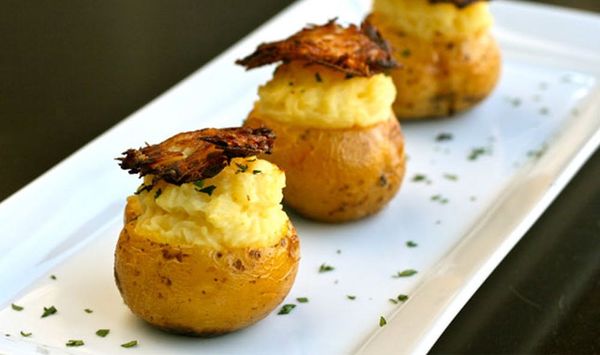 When it comes to Thanksgiving, we’re pumped to be delving into some of our favorite classic recipes. And who can resist a good take on mashed potatoes? These little morsels of deliciousness are not only mashed, but baked and fried too! Yum.

Pre-heat oven to 400 degrees. Wash and dry the potatoes.

Take 2/3 of the potatoes and drizzle 1 tablespoon oil and toss until well coated. Roast in the oven for 35-40 minutes or until easily pierced with a fork.

When cool enough to handle, cut off the top portion of potatoes (or cut them in half). If the potatoes are really bumpy and won’t sit upright on their own, shave a small piece off the bottom as well so they sit flat. Then scoop out most of the potato flesh using a melon baller, leaving a thin rim of potato inside the skin.

Mash the potatoes using your preferred method/recipe. We used buttermilk, sour cream, and a touch of butter. To get them nice and fluffy, you can use a potato ricer or even a food processor if you like the smooth texture.

From there, pipe the mashed potatoes into the skins using a pastry bag and a star tip. This is totally unnecessary. You can definitely just spoon them in, but you know how we like to get all fancy sometimes. Brush them with a little melted butter (optional), and pop them back into the oven until warmed through and starting to slightly brown on the edges.

While potatoes bake, heat the remainder of the oil in a skillet until very hot. Peel and shred the remaining potatoes. To get crispy hash browns, you want to squeeze all of the moisture out of the shredded potatoes using a potato ricer or paper towels.

Drop little piles of shredded potatoes into the hot oil and fry on each side until golden brown, turning once. Latkes!

Remove stuffed potatoes from oven and top with hash brown and sprinkle with chives or parsley and top with crispy hash brown rounds. Triple Threat! Baked, mashed, and fried!

From Your Site Articles
Jaymee Sire
Jaymee Sire is an Emmy-award winning television reporter for ESPN. When she isn’t covering a sporting event, her true passion is food. Check out Jaymee’s alphabet-themed food blog, E is for Eat, and be sure to follow her on Twitter & Facebook.
DIY Recipes
The Conversation