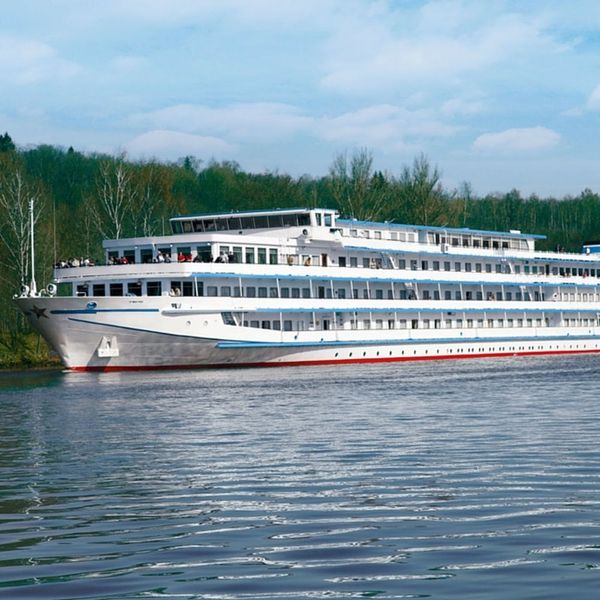 The weather is warming up, wanderlust is on the rise and vacays are quickly getting booked. From the perfect weekend getaway to a much-deserved solo travel adventure, the variety of vacations to choose from can be overwhelming. Sometimes you don’t want to travel like a local, but live in luxury and have a once-in-a-lifetime adventure. Which is why booking one of these nine jaw-dropping cruises might just be the answer to your indecisive prayers. Get your passports ready, pack your bags and prepare to board one of these incredible boats.

2. Pathways of the Pharaohs: This 12-day cruise through Egypt has you gliding through the Nile and Lake Nesser, taking in sights like the Great Pyramids, the Sphinx and the colossal temple of Abu Simbel. (Photo via Viking River Cruises)

3. North Pole: The Ultimate Arctic Adventure: Why “SANTA! We know him!” isn’t the official tagline of this North Pole getaway we’ll never know, but what we do know: This 14-day Arctic adventure will have your wildest fairytale dreams coming true. (Photo via Quark Expeditions)

5. Imperial Waterways of Russia: Travel the River Victoria from Moscow to St. Petersburg during this 13-day cruise filled to the brim with Russian history, art and culture. The trip will cost at least a cool $5,000, making it truly a once-in-a-lifetime vacation. (Photo via Uniworld).

6. Craft Cruises: Calling all knitters, beaders and makers alike: We have just the cruise for you. Craft Cruises specializes in (you guessed it) craft themed cruises. You can opt for a cruise around the US or travel as far as South America, New Zealand or Antarctica. But no matter where you go, a community of crafters will follow. (Photo via Craft Cruises)

7. Zen Cruise: They say vacation should be relaxing, but the Zen Cruise takes that idea to a whole new level with meditation, yoga, poetry, live music and much more. The 2016 ship has already sailed, but start planning now for an early 2017 trip. (Photo via The Zen Cruise)

8. Amsterdam to Bruges Beer Vacation Cruise: Brought to you by the brilliant minds over at BonBeer Voyage, this seven-day cruise sold out so quickly for its 2016 voyage that registration for the October 2017 trip is already open. A European, beer-filled vacay? Sign us up. (Photo via BonBeer Voyage)

9. Gauchos, Glaciers & Penguins: Visit Tierra del Fuego by land and sea in this new adventure from Australis. Before you set sail to Tierra del Fuego, you’ll make a quick stop at Cape Horn to visit a small king penguin colony. We’re pretty sure that’s all we have to say to convince you to book your spot. (Photo via Australis)

Planning on booking a cruise this year? Tag us in your pics with @BritandCo!

Kelsey Nelson
Kelsey Nelson is a born-and-raised Ohioan living life in South Carolina. She thrives at binge watching Netflix, contemplating what to order at the bar and running any trail or road she can get her feet on. In addition to being a Brit + Co contributor, she writes about southern pleasantries, DIY mishaps and more at North Living South. If she isn’t writing or running, she’s off adventuring with her husband Brad and their Lab/Dachshund mix, Gordy.
Home News