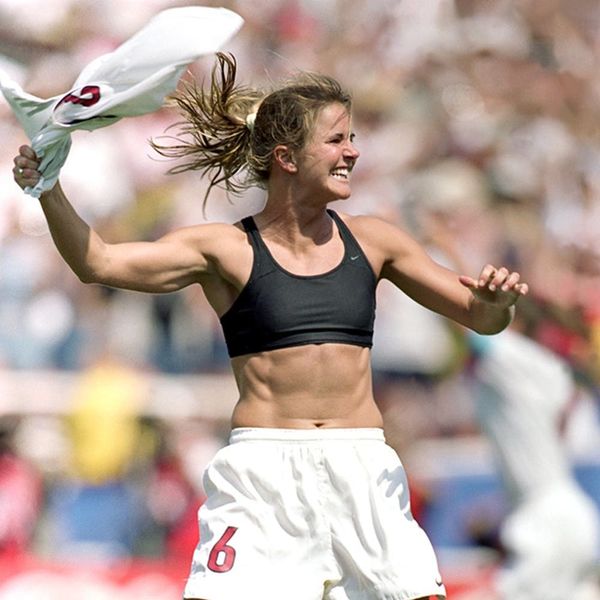 OHMYGOSH, we’ve got #OneMore game to win and the US Women’s National Team will be leaving Canada with the FIFA World Cup trophy for a third time! You’d better be freaking out, because this is a huge deal!

Since I’m sure you’ve become obsessed with the current USWNT roster throughout the tournament (you have, haven’t you?!), we thought it would be essential to take a look back at the team’s history of badass ladies before the 2015 squad faces defending champs Japan for the title later today. Turn back time with six former players that still hold a strong place in my heart now + forever (this list could have gone on forever, TBH). Then get your game face on, throw on the most patriotic outfit (that shouldn’t be hard considering it’s July 4th weekend ;) and cheer on the US team to victory.

1. Michelle Akers: The former forward and midfielder — who attended the University of Central Florida like yours truly ;) — was part of the Women’s World Cup winning teams in ’91 + ’99, and was honored with the Golden Boot (aka top tournament scorer) during the ’91 contest. Since retiring from the national level she’s been honored as the FIFA Female Player of the Century, inducted into the US National Soccer Hall of Fame and is the face of training camps + rescues horses. Basically she’s still sprinting through life as fast as she did on the field. (Photo via Tom Hauck/Getty)

2. Brandi Chastain: Ever since her unforgettable sports-bra-revealing winning moment at the ’99 Women’s World Cup, the former defender and midfielder has stayed active in the sports world. After retiring in ’04 she’s popped up on various networks as a studio commentator during World Cup tournaments and the Olympics and released a book on women’s competitive sports. Schooling the children, as one does. (Photo via Jed Jacobsohn/Getty)

3. Mia Hamm: Also retiring in ’04, one of the most famous faces (and most marketable female athletes of her generation — check her resume) in women’s soccer has kept a busy but low-key profile after saying farewell to the field. The star forward + #2 all-time goal scorer for the USWNT, and the first woman inducted into the World Football Hall of Fame, now spends her days as co-owner of the future MLS LA team, sits on the board of Italian soccer club A.S. Roma and runs the Mia Hamm Foundation in honor of her brother. To this day, there’s nothing Mia can’t do. (Photo via Scott Barbour/Getty)

4. Julie Foudy: Another ’04 retiree, the midfielder and National Soccer Hall of Fame inductee has since made a name for herself in sports broadcasting as an analyst, reporter and commentator for women’s soccer on ESPN. Even more impressive is the Julie Foudy Sports Leadership Academy she launched with her husband to promote sports and leadership for girls age 12 to 18. (Photo via Lisa Blumenfeld/Getty)

5. Briana Scurry: The former goalie, who retired from the national team in ’08 and is #2 in international appearances for female goalkeepers, is a notable player for various reasons: she was one of the first African-American pro women players and one of the first out LGBT players. In her post-soccer days she fills her time with speaking engagements and is a sports analyst and an active advocate for concussion awareness and America SCORES, an organization that inspires urban youth to live healthy + work hard. (Photo via Ronald Martinez/Getty)

6. Kristine Lilly: Ending her career in ’10 with the national team as the most-capped player in the history of soccer (for men + women), this midfield + forward left on a major milestone. Now active with various charity organizations, a founder of the Team First Soccer Academy and the Kristine Lilly Soccer Academy, it’s clear this soccer star isn’t letting the game drift too far from her life. (Photo via Guang Niu/Getty)

Which former US Women’s National Team members were your faves? Share yours in the comments.