Valentino Just Debuted *the* Most Insane Dr. Seuss-Inspired Hats on the Runway 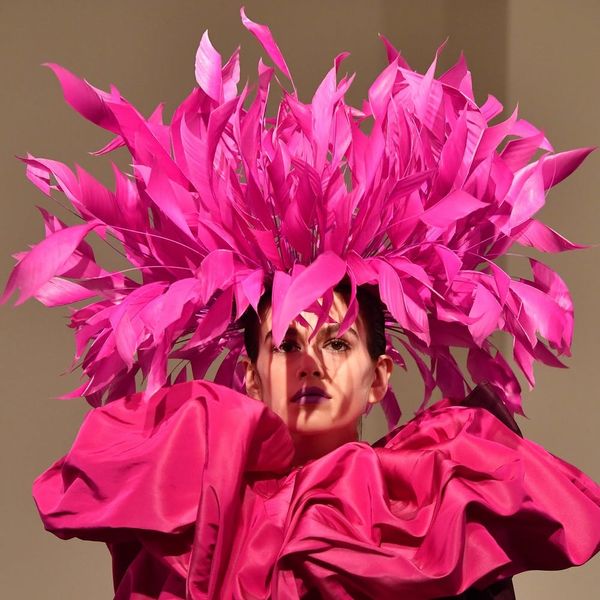 As we near the end of a fashionable few weeks in Paris, with both men’s fall/winter 2018 collections and haute couture lines being released, we’ve seen some WILD style. Y/Project x UGG gave us a glimpse at the most extra thigh-high boots we’ve ever seen, and now, it’s Valentino turn to make us gasp at its attention-grabbing headwear.

At the brand’s Spring 2018 Couture runway show, you’d be forgiven if your eyes weren’t on the clothing — because the accessories were the stars of the show. Models, including Kaia Gerber, walked the runway in bright, colorful, feathery hats that reminded us of something Dr. Seuss could’ve dreamed up in one of his classic children’s books.

It was Philip Treacy, however, who created the hats, as imagined by Valentino’s creative director, Pierpaolo Piccioli.

Volumes that expand, volants that quiver, feathers that vibrate on hats created by @philiptreacy. Straight from the #ValentinoHauteCouture #SS18 Show finale, take a closer look at the Collection created by #PierpaoloPiccioli. More via #linkinbio

Piccioli gave a little behind-the-scenes insight on the Valentino Instagram account, saying, “In a virtual era characterized by technological acceleration, it gives me pride and makes me feel full of hope keeping alive the Atelier in Rome which I consider a true artists studio. I know and I admire all the people who work there. I am very touched by their stories. Behind their hands, behind their technical skills I see human stories. The same stories which have the power to change clothes.”

Hey, if those stories produce visual art like this, we’re all about it!

What do you think of the Valentino collection? Tell us @BritandCo!

Shea Lignitz
Shea can be found in the nearest bookstore or brewery, exploring the great outdoors, or blasting Led Zeppelin. She grew up in the cold and rain of Northern California's redwoods but is currently wandering around Texas.
Fashion Week
Style News
Fashion Week hats
More From Style News