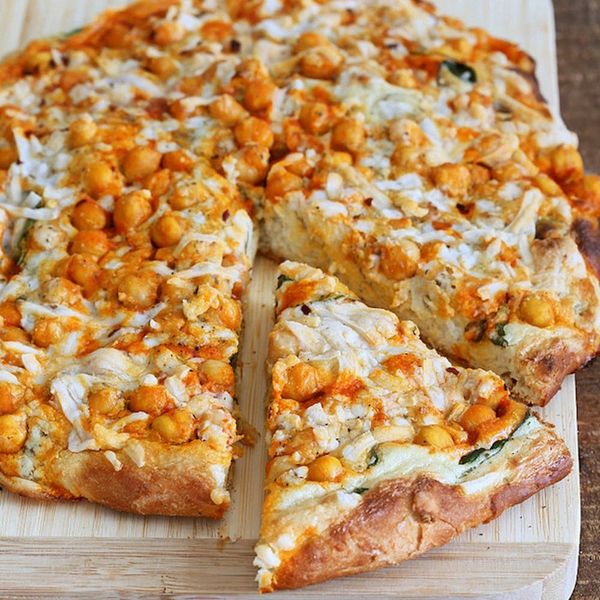 It’s football season! Nothing says fall quite like watching football with your friends and family, surrounded by autumn decor, spiced cider and wine and perhaps a cozy fire. But let’s face it: Football food isn’t exactly KNOWN for its health factor. There are lots of ways to indulge healthily, whether it’s eating tiny taco bites or leaving off the sauce. But what if you’re skipping the meat altogether? Not to worry — these 12 completely vegetarian Buffalo-flavored treats will help you eat like a blue-blooded football fan, minus the meat.

1. Buffalo Falafel Pitas With Garlic Blue Cheese Fries: Talk about gourmet! This recipe isn’t your traditional medium for Buffalo sauce, but we’re totally loving it. Bonus health points if you bake the falafels rather than fry them. (via Half Baked Harvest)

2. Buffalo Chickpea Pizza With White Garlic Sauce: This completely vegan pizza is topped with chickpeas and drizzled with white garlic sauce and celery “ranch.” If you’re 100% vegan and concerned about the Buffalo sauce, don’t be — the name comes from the sauce’s origins (Buffalo, New York), NOT the animal. (via Vegan Richa)

3. Buffalo White Bean Quinoa Bites: These quinoa bites are totally yummy and super healthy. They’re gluten-free and can also be made vegan by substituting Daiya cheese for the mozzarella. Pro Tip: Dip these in Greek yogurt rather than sour cream for a high-protein, lower-fat alternative. If you’re vegan, opt for coconut yogurt or a vegan ranch alternative. (via Food Doodles)

4. Buffalo Mac & Cheese: Be warned: This option is definitely not vegan. Nor is it exactly a diet food. But it’s SO VERY GOOD! This vegetarian version of Buffalo mac and cheese is the perfect comfort food for cool autumn days or evenings when you’re watching the big game. (via Krista and Michele)

5. Buffalo Chickpea Lettuce Wraps: It’d be difficult to eat too many of these, seeing as they’re both low-carb AND vegetarian. They can be vegan too, if you sub out the mayo for Vegenaise. (via Delish Knowledge)

6. Buffalo Roasted Chickpeas: Buffalo-inspired recipes don’t have to be complicated. This super simple recipe proves it! Just combine Buffalo sauce with butter, salt and some chickpeas, throw ’em in the oven and bake. Pretty soon you’ll have a totally delish vegetarian snack to nom on during the game. (via The Two Bite Club)

7. Buffalo Chickpea Sweet Potato Burgers With Whipped Feta Garlic Sauce: Noticing a theme here? Chickpeas are FANTASTIC for pairing with Buffalo sauce, and these vegetarian burgers prove it. Make sure not to sub out the chia seeds, though. They act as the binder in these burgers to keep everything together. (via Veggie and the Beast)

8. Vegetarian Buffalo “Chicken” Dip: Vegetarians can dip right along with their meat-eating peers thanks to this delicious bean-based recipe. All you need is some cream cheese, cheddar, Buffalo sauce and white beans… and of course, the chips! (via The Wannabe Chef)

9. Crispy Buffalo Cheddar Potato Nachos: Who needs ground beef on their nachos when you can have THIS? These super cheesy, gourmet-style nachos are made with thinly sliced potatoes, topped with sharp cheddar and gorgonzola and flavored with homemade Buffalo sauce, avocado, cilantro and green onion. (via Half Baked Harvest)

10. Oven Baked Buffalo Cauliflower: These light and tasty cauliflower bites are a great alternative to chips. Pro tip: As an alternative to store-bought sauce, you can also just mix 1/3 cup melted butter with 2/3 cup hot sauce. (via Spend With Pennies)

11. Buffalo Quinoa Balls With Ranch Dipping Sauce: How do you take the concept of Buffalo-slathered meat dipped in ranch and make it completely vegan, you ask? By swapping out the meat for quinoa balls and the ranch for a cashew-based sauce. (via V Nutrition)

12. Sriracha Buffalo Sauce With Grilled Cauliflower: This recipe is served with grilled cauliflower, but your meat-eating friends can drizzle it over their chicken wings too. The secret ingredient (other than Sriracha) is apple cider vinegar — so we’re considering this stuff a health food. (via Pickled Plum)

Maggie McCracken
Maggie McCracken is a freelance writer, blogger and aspiring digital nomad. She writes primarily about food, travel, yoga and healthy living, and she has a background in health and science journalism. You can read more of her work on her lifestyle and travel blog, The Olive Branch.
Healthy Recipes
Healthy Eating
Healthy Recipes recipe roundup Vegetarian Recipes
The Conversation
Reviews:
More From Healthy Eating