Wake Up Call: This Is the Anti-Music Festival You’ve Been Waiting For 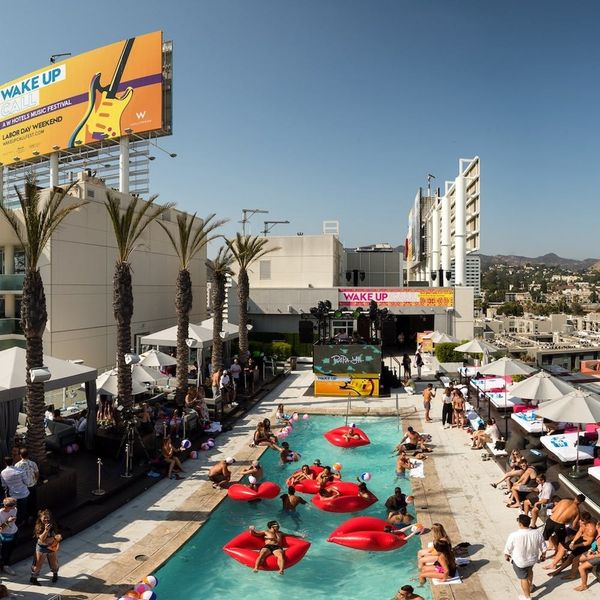 Our relationship with music festivals is a complicated one. We love the excitement, unbridled energy, over-the-top fashion and, of course, live performances of artists we love and artists we had yet to discover. But then there’s the often- overwhelming crowds, dust-covered everything, long lines for mediocre food and drinks, and even longer lines for less-than-mediocre bathrooms. Not to mention that getting in and out of festival grounds is trickier and more time-consuming than most escape rooms.

W Hotels may have just found a way to combine all the best parts of enjoying live music shows without any of the annoyances. Wake Up Call, the brand’s global music festival series, available exclusively to Marriott Rewards and Starwood Preferred Guest (SPG) members, is a completely reimagined and upgraded festival experience. Picture swapping a dirty field with a luxurious hotel, along with all the amenities that come with it. Hang out at the pool while a DJ spins nearby. Catch intimate performances in a living room setting, or nosh at a number of restaurants and bars. Change your outfit or take a power nap in the comfort of a hotel room. If you need a little detox before you retox, sign up for a workout class or pop into the on-site spa for a massage. Never have to deal with a porta-potty. Enjoy all the time you’ll be saving by having everything in one place — the only lines you’ll have to wait in are the ones for the elevator.

According to Anthony Ingham, Global Brand Leader, W Hotels Worldwide, music has always been at the core of the W experience. “If you look at the list of artists who’ve worked with W and performed at W over the last 20 years, most of them in the early stage of their careers who have then gone on to become huge, it’s 200 people long. So that kind of gives you credibility in the music industry with the labels, with the promoters, with the artists themselves to do stuff that doesn’t feel like a gimmick and that [shows] really we’re in it for the long term. The music festival idea was an evolution. We’d been working a lot with Billboard over the last three or four years to identify emerging artists whose tracks were trending on Twitter and give them a platform to perform [in W hotels] and also create travel destination content with them.”

Wake Up Call started as a three-day experiment at W Scottsdale in 2016 and included names such as Mike Posner, Bebe Rexha, and Cee Lo Green. Organizing a music festival is no small feat, and even though Ingham says it was “kind of chaos,” the event sold out and was a success. Fast forward to 2018, and the new iteration of Wake Up Call is in three cities across the world, with the goal of creating an extraordinary experience for both Marriott/SPG members and the musical artists involved. (Photo via Strauss/Invision for Marriott International/AP Images)

W Hollywood kicked off the series on September 1-3, with a lineup that included Phantogram, Charli XCX, Chromeo, and Betty Who. Next up is Barcelona (September 21-23), which will include Robin Schulz and Martin Solveig, and Bali (October 4-6), which will host Tove Lo and Angus and Julia Stone. In choosing these cities, Ingham said they were looking for destinations that either already had a big music scene or were a “crossroads for the music industry.” The W hotels in each of these cities also have professionally designed sound suites, small recording studios designed to help musicians write and record music while they’re traveling.

Marriott Rewards/SPG members (anyone can join the loyalty program) can book festival packages, which include a hotel room and tickets, or day passes through the Wake Up Call website. For an even more VIP experience, members can also use their points to bid on exclusive moments during the weekend. In Hollywood, that included a private DJ masterclass with Chromeo and backstage party with Phantogram. At the future events, you can enjoy some Spanish tapas with Thomas Jack in Barcelona or hang out with Tove Lo at an insider party in Bali.

Now that’s one wake-up call we can all look forward to.