Can You Hack It? 16 Creative Ways to Use a Waffle Iron 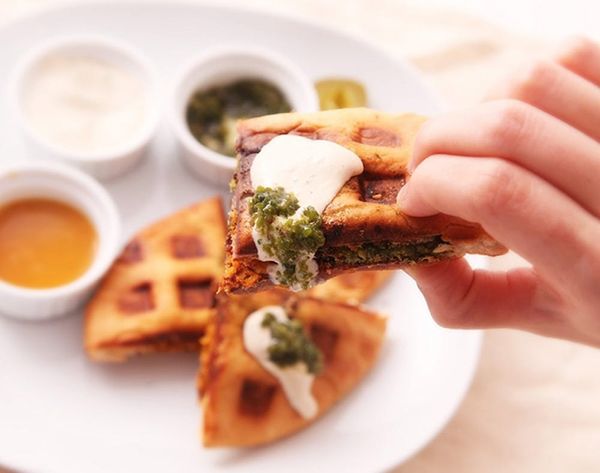 Waffles. So hot right now (err, or cold — but we’ll get there). Taco Bell launched their new breakfast waffle taco, folks are making incredible Monte Cristo-esque creations and so much more. Here we’ve gathered up 16 genius waffle maker hacks that you can buy or DIY in your own kitchen. Let’s get to it!

1. Waffogato ($7): The cronut-creator not only hacked a waffle iron, but also the affogato. Combining a Belgian waffle-dotted ice cream with maple espresso poured over top, we’re left asking, what will he come up with next?

2. Waffle Maker Hash Browns: Who doesn’t love a side of shredded potatoes with their weekend eggs? Achieve crisp potato perfection every time with this clever recipe. (via Macheesmo)

3. Waffled Pizza: Take your pick: Partially bake your crust on the waffle iron then top and finish baking in the oven, or go calzone style with fillings in the middle! If that sounds like too much work, you can always just reheat leftover delivery. (via Waffleizer)

4. Wonut ($3): Fusion foods are totally where it’s at, and these baked and fried waffles/cake donuts have got it going on. (via Brit + Co.)

5. Waffle Biscuits and Gravy: Who woulda thunk it? Homemade biscuits cooked in a waffle iron!? Just think of how much delicious sausage gravy all those nooks and crannies will contain. (via Yammie’s Noshery)

6. The All-Purpose Waffle Bread: “All-purpose” is no joke! This creation stands in for sandwich bread, English muffins, burger bun and more. (via Sassy Earl Grey)

7. Moffles: There’s no need to buy a special maker to cook up a batch of mochi waffles. Take your pick of six clever ways to serve these crisp, chewy treats, both savory and sweet. (via Create Eat Happy)

8. Pull Apart Waffle Fries: Across between pull apart bread and hash browns, these are unlike any waffle fries we’ve ever tried. This technique for reheating leftover fries is pure genius! (via Serious Eats)

9. Bibimbaffle: What a great makeover of a signature Korean dish. Rice and marinated veggies are layered together and cooked until crisp in a waffle iron, then topped with a fried egg and the usual, spicy accouterments. (via Waffleizer)

10. Cinnamon Roll Waffles With Cream Cheese Glaze: We love this way of cooking cinnamon buns, especially as an alternative to lighting up the oven on hot summer mornings. (via Pillsbury)

11. Brown Butter Waffle Cake + Sorghum Meringue Buttercream: How about cake? This might be the easiest — and quickest — way to create perfectly even layers. (via Food52)

12. Ultimate Waffle Croque Madame: All of the elements of a brunch favorite come together in melty perfection atop a waffle iron. Even the egg is fried atop the grates! (via Free Spirit Eater)

14. Fried Chicken and French Toast Waffle: Chicken and waffles is one of those classic combos. Switch things up by serving crispy chicken atop French toast cooked to perfection in a waffle iron. (via I am a Food Blog)

15. Waffle Dogs: Move over corn dogs, the waffle dog is vying for our attention. (via Guava Rose)

16. Turkey Club Bruxie ($8): Maybe more of a sandwich hack than waffle, but Bruxie’s gourmet waffle sandwiches are like no other with “bread” that’s a creative take on the typical Belgian waffle. If you can’t make it out to one of their locations, we’re thinking you can hack it at home. You can even cook the bacon for your club in a waffle iron!

Have you tried any of these hacks? What creative ways have you come up with to use your waffle iron? Let’s brainstorm the next big thing in the comments!

Heather Sage
Heather Sage is a gluten-free recipe developer and freelance writer living in Orlando by way of the Silicon Valley. When she isn’t playing around with alternative flours in the kitchen, she can be found tackling DIY projects around the house or exploring her neighborhood. Check out her gluten-free recipe blog, A Sage Amalgam.
Recipes
The Conversation
Reviews:
More From Recipes