We Helped Calvin Harris + John Mayer With Their Tinder Profiles 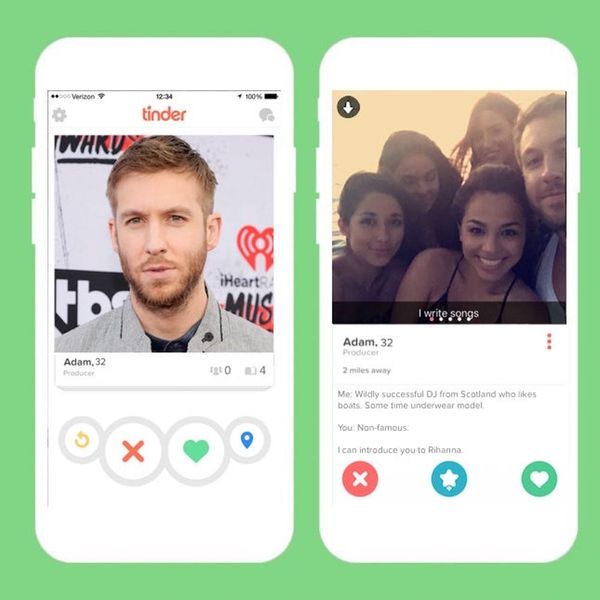 Before the coming of Swiddleston, there were Taylor Swift + Calvin Harris, pop music’s hottest power couple since John Mayer and Katy Perry. The photogenic pair split earlier this summer after 15 months of dating and broke pop culture’s collective heart, leaving the hashtag #swangoals to die a fiery death (RIP) — and making Calvin Harris a single man. Speaking of single men, the aforementioned John Mayer is also back on the market. During his appearance on Bravo’s Watch What Happens Live!, the singer-songwriter told host Andy Cohen that he’s all primed to meet the love of his life. “The stage is set, but I’m excited for a meet cute at some point,” John said. “I’m single and I’m excited about the future.”

According to TMZ, the This Is What You Came For producer is “DONE dating famous chicks.” Reportedly, Adam Wiles, better known as Calvin Harris, has a specific type in mind for his next GF: a “sexy Latina… a Sofia Vergara-type who is not famous.” Okay, then! Recently, the Scottish DJ — in a move reminiscent of my ex-boyfriend— shared some snaps of himself vacationing in Cabo surrounded by women. And you know, if being on a boat in Cabo with a female to male ratio of 5:1 doesn’t scream “I’m over you” — well, nothing does.

John Mayer, whose ex Katy Perry has since moved on to actor Orlando Bloom, is ready for the next chapter. Having famously been linked to the likes of Jessica Simpson, Jennifer Aniston and even Calvin’s ex Taylor, the singer has developed quite a rep as a serial A-list dater, but perhaps that’s all about to change. “I’m ready to roll. I’m more mature than I’ve ever been,” John told Andy not two days ago. Hopefully that means the days of controversial Playboy interview answers are long behind him. But hey, if we’re willing to give fine wine and soft cheese time to age up, we’re willing to extend you the same courtesy, John!

Have you had any luck with Tinder? Tweet us @BritandCo!

Kimberly Wang
Kimberly Wang writes about all things pop culture, tech, style, and beauty. She's a Bay Area transplant and has an MFA in Creative Writing from Columbia University. On a sunny New York day, you can find her hanging out with her mini schnauzer Isabelle Jellybean on a blanket in Central Park.
Dating
Tech
Dating love