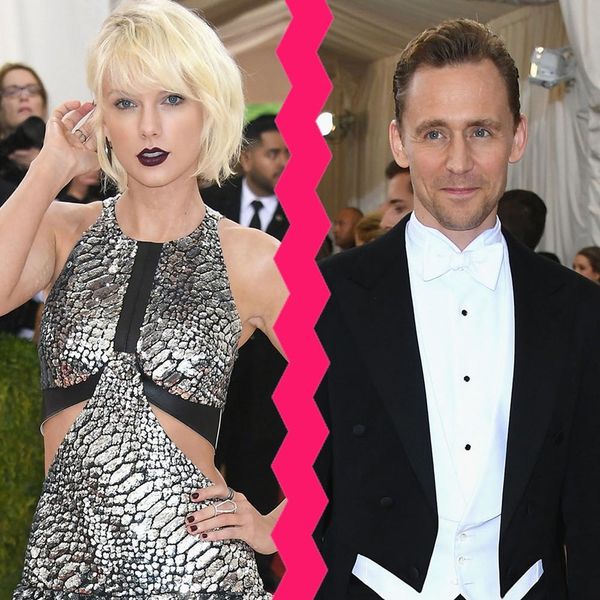 If there is one thing we know to be true about Taylor Swift it’s that she’s a sucker for love. If you haven’t been able to figure this out through her super personal songs, her long list of boyfriends might do the trick. And even though her most recent, year-long relationship with Scottish DJ Calvin Harris came to an end just two weeks ago, it appears as though the pop star has moved faster than anyone would have guessed.

Earlier today UK paper The Sun published photo of Taylor Swift and British actor Tom Hiddleston VERY much together on a beach in Rhode Island near her mansion where she’s held her Fourth of July party for the last few years. In the photo (which you can see here), Taylor and Tom are spotted holding hands, making out, taking selfies and at one point, the 35-year-old even offered her his coat.

WTF! How could this all happen so quickly?! It appears as though the two first met at this year’s Met Gala on May 4. In an interview with MTV Tom is reported saying, “I sat next to her at dinner that night and she was very charming. She is amazing – I’ve seen a couple of her videos […] I think ‘Shake It Off’ was released around the time we made I Saw the Light and she’s very cool, yeah.” He also mentioned that Taylor asked him to dance and although he hadn’t done so in forever, he obliged.

Could this all be a ruse or secretly some behind-the-scenes shots of her newest music video? It could be, but if it is no one has told Calvin. After the couple’s breakup, he posted a super mature tweet about the whole situation but he has since deleted it. Instead, just an hour ago he posted a tweet that read “Oh boy it’s about to go down.” But then deleted that tweet as well. Additionally, he has unfollowed Taylor, blocked her and all her fans and deleted all his photos with her. Oh sh**! Looks like Calvin’s right. It is about to go down.