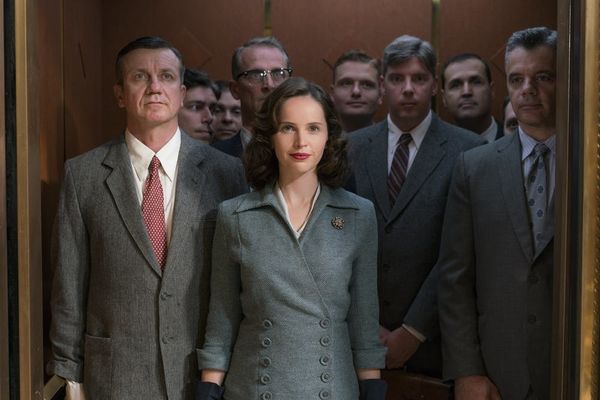 Welcome to Brit + Co’s Weekly Entertainment Planner! Each Monday, we highlight one thing we’re excited about in six categories — movies, TV, music, streaming services, podcasts, and a bonus pick from all of the above — to help you navigate your week in watching and listening. Check out our picks for the week of December 24 to 30 below. Your eyes and your ears will thank us!

On the Basis of Sex (December 25): The new Ruth Bader Ginsburg biopic is the perfect inspirational movie to check out when your holiday festivities are over. Felicity Jones stars as the iconic US Supreme Court Justice, and the film traces her extraordinary career, including an early fight to bring a groundbreaking gender equality case before the US Court of Appeals. On the Basis of Sex opens Tuesday, December 25. (Photo via Jonathan Wenk/Focus Features)

When Calls the Heart: The Greatest Christmas Blessing (December 25): Fans of When Calls the Heart look forward to the popular Hallmark Channel show’s Christmas movie every year, and this year’s will follow season 5’s story. As the recently widowed Elizabeth (Erin Krakow) prepares for the birth of her baby, she looks to Abigail (Lori Loughlin) and Rosemary (Pascale Hutton) for their support. Elsewhere, a group of orphans get stranded in Hope Valley for the holidays, and Abigail is determined to make sure that the children don’t miss out on any of the season’s magic. Watch it on Tuesday, December 25, at 8pm ET/PT on the Hallmark Channel. (Photo via Eike Schroter/Crown Media)

Alexa & Katie, Season 2 (December 26): It might be the quietest week in Netflix releases all year, but that doesn’t mean there’s nothing new to check out during your holiday downtime. Alexa & Katie, the heartwarming comedy about two high school best friends, returns for a second season that looks downright joyful, with Alexa (Paris Berelc), who underwent cancer treatment in season 1, saying she’s “looking good” in the health department. Things don’t always go as planned, of course, so tune in to see what unfolds in season 2. It arrives on Netflix on Wednesday, December 26. (Photo via Beth Dubber/Netflix)

Mary Poppins Returns OST: Are you still obsessing over Mary Poppins Returns since seeing its theatrical opening last week? Us too. Relive the magic with the official soundtrack, which, along with magical instrumentals, includes the movie’s original songs sung by Lin-Manuel Miranda, Emily Blunt, Angela Lansbury, and lots more. The soundtrack is available wherever you stream or buy music now. (Photo via Walt Disney Studios)

Lisa Jewell, Watching You (December 26): With any luck, you’ve got some holiday downtime to sink into a juicy new page-turner, and there might be no better candidate than Lisa Jewell’s new novel, Watching You. The best-selling author of Then She Was Gone is back with another suspenseful read about a murder in that leaves a well-off, picturesque English town in shock. Use some of your holiday money to nab this when it’s out on December 26.