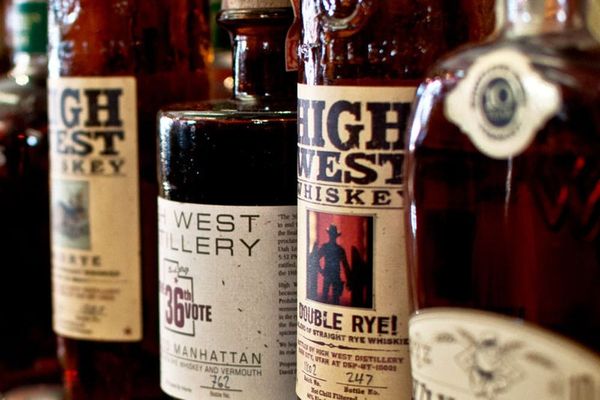 Hi! I’m Chris Gardner from ManMade, a craft and DIY design site for guys, and I’m excited to share a little primer on one of my favorite treats: whiskey.

So, whether you’re already a fan and want to learn a little more, or think that stuff tastes like a fiery bog in a glass, there’s lots to know and a lot to love about whiskey.

Whiskey is made from cereal grains like corn, barley, rye, and wheat. Yeast are added to convert the sugars in the grains into alcohol (a mash), which is distilled and then aged in wooden casks. The caramel color and distinguishing flavors come from the interaction of the distilled spirits (which are clear) and the charred wood of the barrel. The name comes from the Anglicisation of the Gaelic word for water, uisce.

Whiskeys are distinguished by the fermented grain used, and the area of origin, and then can be further distinguished by the style and length of barrel aging. There are countless kinds, but here are four widely available styles you’re likely to encounter in your neighborhood pub or liquor store.

Bourbon – according to U.S. federal regulations, bourbon must be made from 51% corn, aged in new charred white oak barrels, and must be bottled at at least 80 proof (40% alcohol). “Straight” bourbons are generally aged for four years or more, unless they’re otherwise labeled. Bourbon is known for its sweet caramel and vanilla flavors, and darker, reddish color. Many of the traditional brands are made in the areas surrounding the Ohio river in Northern and Western Kentucky and Southern Indiana, though local distilleries all over the country distill in this style. I’m asked this question often, so just remember: all bourbons are whiskeys, but not all whiskeys are bourbon.

Rye – similar to bourbon, but must be made with 51 percent rye mash, and aged in new charred oak barrels. Straight ryes are aged for at least two years. The rye grains lend a spicier, fruity note, and are less sweet than bourbons.

Blended Whiskey – Blends come from using different barrels and a variety of grains. Many Canadian and Irish whiskeys are blends, as well as some Scotches. Good blended whiskeys taste like, well, good blended whiskeys, and are known for their reliability, as distillers can combine multiple barrels for a consistent flavor across bottles. Unlike bourbon or rye, these do not need to be aged in virgin barrels, and use second-use bourbon or sherry casks, which impart their own flavor. Many of the distilleries you may have heard of produce mostly blends: Johnnie Walker, Dewar’s, Crown Royal, Canadian Mist, Jameson, Bushmills.

Scotch Whisky – Scotches are made in Scotland, most all from malted barley, and must be aged for at least three years. Single malt scotches are made from only barley and water, and must be distilled in pots at a single distillery. These are further distinguished by the region of production (Lowland, Speyside, Islay, Highland, Campbelltown) and the years of age: often 10, 12, 16, etc.

A Note on Jack Daniels: Jack Daniels, the best selling brand in the United States, is a Tennessee whiskey. It is similar to a bourbon, it does not submit itself for certification as such, and also goes through a charcoal filtering process.

How to Taste Whiskey: Whiskey experts recommend tasting any whiskey “neat” – that is, at room temperature, in a glass, or with just a splash of water to open up the aromas. That can be a pretty intense experience for novices, particularly if trying a single malt scotch for the first time.

So, my vote is: try them in the way that’ll make you enjoy them. If you want to add ice, add ice. If you want to mix with water or soda, do that. You’ll still learn to taste the differences between bottles and types, though you’ll want to stick to less expensive bottles at first so you can develop your taste before moving onto pricier straight bourbons, Japanese whiskeys, or single malt Scotches. When you are ready to drink it neat, start with bourbon, as it’s sweet, vanilla notes are easy to love. Then move onto a blended scotch like Chivas Regal 12 or Dewar’s 12 (blue label), and then go for the single malts.

One of the best ways to learn to appreciate whiskey is in a cocktail, so here are three easy-to-love options that help you develop a taste before investing in the big stuff.

Notes: A tablespoon = ½ ounce, so there’s no need to buy any specialty tools as you get started. Simple syrup is made by heating equal parts sugar and water to dissolve the sugar.

The Whiskey Lemonade: While this is similar to a sour, if you order a “whiskey sour” at a bar or restaurant that doesn’t specialize in cocktails, you’ll likely get a drink made with commercial sour mix, which is…um, gross. Stick to fresh ingredients, and you’ll really be able to taste the intricacies of the ways the spirit interacts with the cocktail.

Combine all the ingredients with lots of ice in a cocktail shaker, or a mason jar with a lid. Shake very hard for at least 15 seconds to blend, and then pour into a glass (or just take the lid off the mason jar). Taste, then add water or club soda as desired to balance the flavor of the bourbon with the acidity and sweetness.

To spice things up, add some fresh herbs like thyme or rosemary, mix with iced tea, or substitute honey or maple syrup as a sweetener. Just heat with an equal part of water so it will dissolve nicely when shaking.

The Heiress: This drink is based on a classic cocktail called the Millionaire, but here, it’s made a little sweeter and livelier, full of fun. And it’s pink, if you’re into that.

– 2 oz orange liqueur such as Gran Marnier or Cointreau

Combine the first four ingredients in a shaker with lots of ice, and shake for at least one minute to really get the egg frothy. Strainer them into chilled martini glasses, and top with a dash or two of Angostura bitters.

The Old Fashioned: This drink isn’t as accessible as the other two, but it’s the quintessential whiskey cocktail, and one you’ll learn to love. This cocktail is built in the glass, rather than shaken, so you can experience the heavy, cold texture of the whiskey.

I’ve written a full walkthrough on ManMade, so check it out for all the details, but the basic technique is: Muddle a wide strip of orange zest with ½ oz simple syrup and two dashes of Angostura bitters in a glass. (Use a cocktail muddler or the handle of a wooden spoon). Fill the glass with ice, and add two ounces of whiskey: bourbon or rye, preferably. Stir several times with a straw or spoon, and enjoy. If you don’t like it on the first time, try it again. You will :)