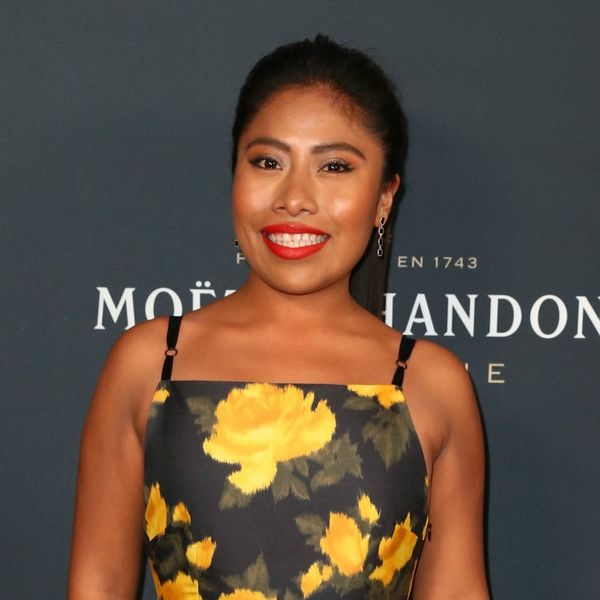 Vogue Mexico revealed their January 2019 cover star on Tuesday, and with the reveal, made a triumphant stride in the publication’s trajectory toward inclusivity — both in Mexico and around the world. Featuring former schoolteacher Yalitza Aparicio, the breakout star of the movie Roma, the cover is the first in the mag’s 20-year history to feature an Indigenous Mexican. The cover even features the phrase In tiu’n ntav’i: “A star is born” in the Mixtec language.

Indigenous Latin Americans comprise a sizable minority that is consistently underrepresented in media and pop culture. So, people were pleasantly surprised (and a little bit shocked) that the magazine took the bold step of spotlighting Aparicio, which is particularly notable in light of racism accusations that have recently been lobbed at Vogue‘s global brand.

And just this year, Vogue was embroiled in two different race-related scandals featuring models Gigi Hadid and Kendall Jenner. In a spread for Vogue Italia this spring, Hadid’s deeply tanned and bronzed appearance prompted detractors to suggest the model and magazine were guilty of Blackface. A few months later, accusations of cultural appropriation followed a series of photos for the CFDA/Vogue Fashion Fund, in which Jenner’s hair appeared to be styled in an Afro. Vogue apologized in both cases.

It’s not just the context of Vogue‘s public missteps that gives Aparicio’s cover such tremendous significance, though. It’s that the image of Aparicio — an Indigenous Mexican woman, resplendent and powerful (and wearing Dior, no less) — arrives at a time when thousands of Indigenous Guatamalans are journeying to our southern border with Mexico, hoping for a safe life in the US. They are fleeing dangerous climates, and brutal violence at home — due, in large part, to US involvement in Central American affairs — violence that targets Indigenous women disproportionately.

Just a week after the death of a seven-year-old Indigenous girl named Jakelin Caal Maquin while in US border custody, the cover seems an important reminder of the humanizing power of cultural representation, something that Aparicio understands deeply.

“Certain stereotypes are being broken: that only people with a certain profile can be actresses or be on the cover of magazines,” the first-time actress tells Vogue in an accompanying video. “Other faces are now being recognized. It is something that makes me so happy and proud of my roots.”

(Photo by Joe Scarnici/Getty Images for The New York Times )

From Your Site Articles
Kat Armstrong
Kat has been a writer, social media maven and mom for longer than she's willing to admit. She's also spent time in front of and behind the camera, interviewing celebs, politicians and acting as a producer for fashion and artistic photography shoots. When she isn't writing for various orgs and publications, she's hanging with her kids, husband and French Bulldog, Peter, in Toronto, Canada.
Inclusivity
Diversity
Inclusivity