5 Reasons Why Kraków, Poland Is the 2019 Destination You Should Add to Your List 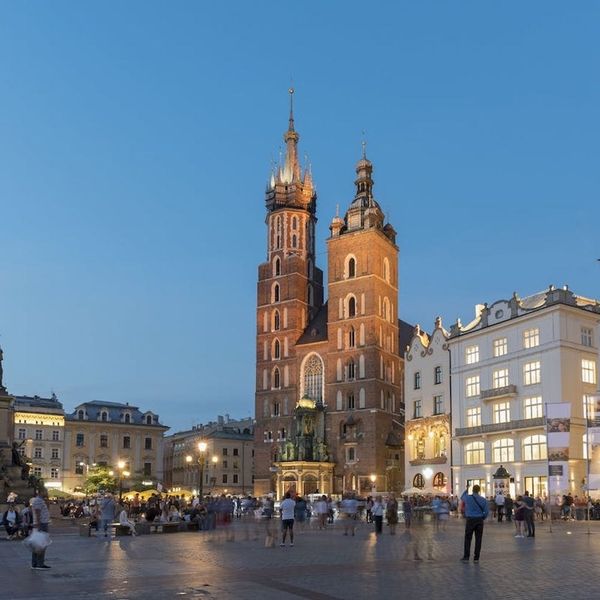 I grew up in a city where the glowing face of a landmark clocktower was once nicknamed the “Polish Moon.” A local microbrewery, more recently, paid homage to this fast-fading memory by appropriating the name for its tasty milk stout. My relationship to Poland has been similarly affectionate and indirect. My beloved grandfather was raised by Polish immigrant parents not so far from that very clock. From him, I learned to eat kielbasa; for him, I took up Polish dance. My last name was also his and, like him, sort of Polish — a riff on something past, a new-world adaptation.

The Poland of reality is not the Poland of Midwestern great-grandparents’ lore. That’s not a bad thing, either. The country’s tumultuous past, and current political tensions, belie a fascinating destination at the intersection of history and hipster — one that’s unabashedly welcoming to tourists. On a recent holiday to Kraków, I realized that everything I thought I knew about Poland was moot. Here are five reasons why you should see it for yourself.

1. That exchange rate, though. Poland has been a member of the European Union since 2004, but don’t try paying for your pierogie with euros. The Slavic nation has held onto its own currency, the złoty, and it’ll give you much better bang for your buck: At publication time, a single złoty is work around $0.27 USD. Go forth and spend.

2. All the Food: Kraków is home to a whopping 26 Michelin-rated restaurants, most of which are located near or within Stare Miasto, the city’s central tourist district. Expect sophisticated takes on rustic favorites (now is your chance to try wild boar on a budget) and local ingredients, served with Old World hospitality.

But don’t limit yourself to the city’s fancier provisions. A simple plate of pillowy pierogi dumplings stuffed with fillings of potato and cheese, mushrooms, and meat make a cheap and cheerful meal. Chewy obwarzanek breads, a pretzel-bagel hybrid sold from roadside stalls, are not to be missed.

3. Getting Medieval: Kraków was a German administrative outpost under Nazi occupation, which spared the city from the destruction faced by other Polish cities during the Second World War. The city’s old town, or Stare Miasto, is a UNESCO World Heritage Site for a reason. Its main market square, Rynek Glowny, is the largest medieval town square in all of Europe, and the market hall at its center (the Cloth Hall, or Sukiennice) has been in operation since the 14th century.

Just south of the old town square is Wawel, the fortified architectural complex where Poland’s rulers lived and governed from 1038 to 1596. Its oldest building, the Rotunda of the Virgin Mary, has been dated to the year 970 AD, while some parts of the complex date back as far as a century earlier. (Wawel Hill photo by Jan Kucharzyk/Getty)

4. Kazimierz: The city’s trendiest district is also arguably its most historically loaded. Today, it’s a hotspot for indie galleries and quirky cocktail spots, but the neighborhood was once its own separate city where, from the late 15th century through the 18th century, a vibrant community of Jewish inhabitants thrived. The area remained a hub for Jewish life until the Second World War, when the Nazis all but decimated the city’s Jewish population. But the community’s centuries-long history in Kraków remains preserved in the district’s architecture, preserved Yiddish inscriptions, and two 16th-century synagogues that now stand as central gathering places for a new generation of Jewish inhabitants who are gradually repopulating the city.

Parts of the Steven Spielberg movie Schindler’s List were filmed in the neighborhood, and Oskar Schindler’s Enamel Factory remains within walking distance — now, repurposed into a museum that’s devoted to this heartrending chapter of the Holocaust in Poland. Just an hour outside the city of Kraków is the infamous Nazi internment facility Auschwitz-Birkenau, a sobering memorial and museum experience that is easily reached by daily tour buses operated by numerous tourism companies. (Old Synagogue photo by Chuck Fishman/Getty)

5. So Many Churches: Poland is really into Roman Catholicism, a trait made plain by the omnipresent likeness of Pope John Paul II — a Kraków native — in statues, paintings, and souvenir stands throughout the city. But don’t be put off by the Poles’ staunchness of religious affiliation; among Kraków’s estimated 120 churches are 1000-year-old relics of architectural wonder. Fourteenth-century Gothic Basilicas St. Mary’s and Corpus Christi are jaw-dropping marvels of craftsmanship. The Church of St. Wojciech (or St. Adalbert in English), which dates back to the 10th century, is one of the oldest Christian edifices in Europe. The 500-year-old Wawel Cathedral, whose exterior has been rebuilt in chunks throughout the years, stands in eye-catchingly cobbled-together grandeur.

When you’ve had your fill of Kraków’s religious architecture, hop a guided tour bus to the Wieliczka Salt Mine just outside the city. Now a UNESCO World Heritage Site, the mine was excavated for table salt from the 13th century until 2007, when it surrendered completely to its current iteration as a subterranean museum/amusement park/banquet hall and, of course, church: St. Kinga’s Chapel, built entirely of rock salt some 300 feet underground in the 1890s, where weekly Mass is held every Sunday. (Photos via Carsten Koall + Education Images/UIG via Getty)

Kelli Korducki
Kelli is Brit + Co's Senior News Editor. Her interests include sensible footwear and glasses that take up 25 percent of her face.
Travel
Travel
Travel
More From Travel