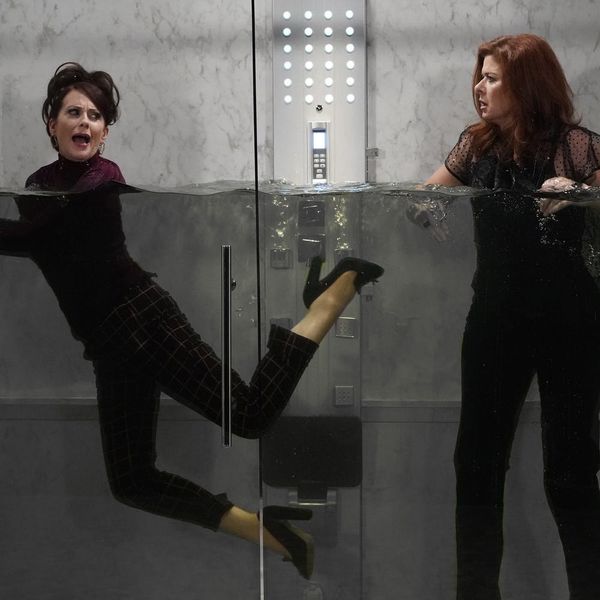 The Will& Grace reboot has already been renewed for seasons 2 and 3, so if you’re not on board yet, now’s the time. The season 1 DVD will be out tomorrow, June 12, and Brit + Co has an exclusive sneak peek at one of the bonus features, in which cast members Debra Messing, Eric McCormack, Sean Hayes, and Megan Mullally reflect on the show’s enduring legacy and take us behind the scenes of some of its funniest moments.

Messing’s favorite scene was the “exploding water bra” from season 2’s “Das Boob” episode, in which Grace wears a water bra to an art exhibit to impress her high school crush, only to have it spring a leak and shoot streams of water from her chest. “I felt like it was kind of a wink to Lucy and Desi [of I Love Lucy fame],” she says in a clip from the bonus features. “It just was a perfect comic set piece.”

And not an easy one to pull off, either. “When Eric’s hands go off [of Debra’s chest], you have to make sure the special-effects guy is on the switch to turn the jets on so that [the water] comes out,” director and executive producer James Burrows explains of the episode, which aired in 1999.

Messing also has fond memories of the scenes that showed Will and Grace during their awkward college years. “I had that bi-level wig. They wanted it to be, you know, a bob, but I was like no, no, no, no, no, it has to be bi-level,” she reveals. “All of us were super, super dorky and that made it funny right off the bat.”

The revival features a lot of the same kind of physical comedy. “The episodes that we’ve shot so far are just as good if not better than anything we had done in the 196 episodes leading up to this new iteration,” Mullally says.

@BritandCo!
Desiree O
Desirée O is a ‘Professional Bohemian’ who loves anything and everything related to the arts, entertainment, and pop culture. She ADORES being a ‘Newsy’ for Brit + Co, covering all of the latest tidbits of awesomeness that you want to read about. When she’s not writing, she’s either making messy art, going on long adventurous walks with her camera, or poking around over at bohemianizm (http://www.bohemianizm.com/). You can find out about Desirée O and her work at http://DesireeO.com/ or follow her on Twitter @DesireeO.
TV
TV
TV