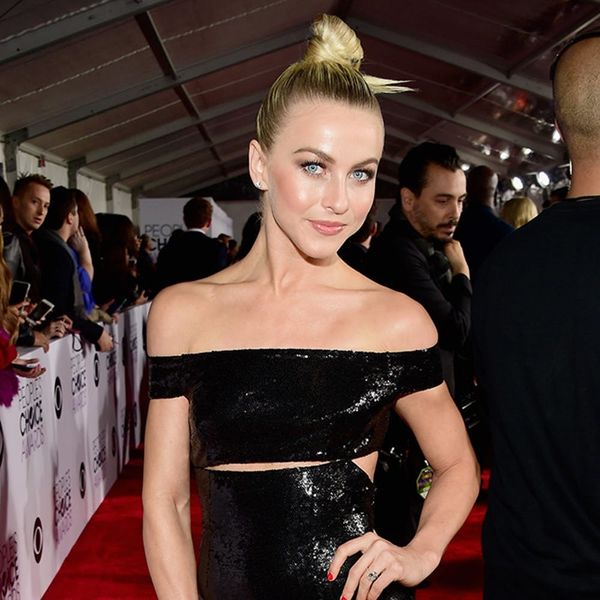 Winter is nearly over (yas!), which is great news for those of us who are ready to usher in fresh looks for our hair and makeup routines. That said, just because warm weather is on the horizon doesn’t mean we should forget about the ‘dos that made winter 2016 extra beautiful. From short and sleek bobs to serious natural waves to bedhead-inspired bowl cuts, celebs‘ cold weather hair came in hot during the final months of winter. We’ve picked the 12 most epic celebrity hairstyles from the past few chilly months to use as inspo for getting out of that winter hair rut. Read on to learn how to copy Julianne, Selena, Karlie and more A-listers’ best cold-weather hairstyles.

Karlie Kloss strutted down the runway at Ralph Lauren’s fall 2016 fashion show sporting totally tucked-in hair. Instead of pulling it out of her oversized collar, the style was intentionally left inside, making it 100% cozy-girl-approved. (Photo via JP Yim/Getty)

: There is no way Beyoncé’s seriously epic Super Bowl halftime show hair wasn’t going to make this list. Her flowing waves were a total showstopper — literally — and proved that lots and lots of body and volume can really take a hairstyle to the next level. This ‘do is also *made* for hair flips. (Photo via Matt Cowan/Getty)

Don’t think that just because it’s February beach waves are out. Selena Gomez’s barely there beach-y waves showcased the natural movement in her healthy hair — it looks like she went from the sand to the red carpet (flawlessly). Her side part keeps things polished and not too casual. (Photo via Frazer Harrison/Getty)

We’re used to seeing Rihanna’s experimental style show in her hair choices, so the super sleek, turned-under bob she sported at the BRIT Awards was a nice change. The bob brought out her defined features while her middle part kept everything super symmetrical. (Photo via Luca Teuchmann/Getty)

2015 was the year of the topknot, and winter 2016 was the season of the next-level topknot, as evidenced by Christina Milian. Her twisty, braided topknot elevated her look to super chic status — and we have to say that those wispy bangs are totally working for her too. (Photo via Christopher Polk/Getty)

Gigi Hadid served up some truly legit hairspiration this year, but the look that stood out to us the most this winter was her fishtail braid high ponytail. It has a slight ‘90s vibe to it (when high braided ponytails were *everything*) but ultimately is modern because of its elegant silhouette and streamlined look. (Photo via Jamie McCarthy/Getty)

Momma-to-be Chrissy Teigen’s half-up hairdo was the picture of elegance at a Grammy Awards party earlier this year. She pinned half of her hair to the back of her head, keeping a steady focus on her flawless makeup. The other side of her hair had a natural lift to it at the crown, which was a nice contrast to the sleekness of the pulled-back side. This was the perfect balanced hairstyle. (Photo via Kevork Djansezian/Getty)

The bowl cut is BACK! Zendaya rocked the trendy 2016 version at an event this winter and fully embraced a messy, bedhead look. Beyond the cut and style, the warm blonde color keeps this look bright. (Photo via Vivien Killilea/Getty)

Katy Perry’s sky-high ‘do at the Golden Globes was epic to say the least — she totally brought back that super teased, retro look and worked it. Maybe it was a Bump-It, maybe it was skilled backcombing… either way, next-level volume made this hairstyle a home run for sure. (Photo via Randy Shropshire/Getty)

The anti-lazy girl topknot is how we’d describe Julianne Hough’s hair at the People’s Choice Awards in January. Instead of keeping everything tightly coiled up, she intentionally left a piece of hair sticking out to the side, which created a really interesting silhouette for this style. Everything doesn’t always have to be perfect, people! (Photo via Frazer Harrison/Getty)

If anyone can rock a trendy minimalist pony, it’s Bella Hadid. Since elaborate, over-the-top styles are out, Bella focused on keeping her locks totally out of her face and fuss-free with this low ponytail. This simple ‘do translates well from day to night, desk to dinner and beyond. (Photo via Anthony Harvey/Getty)

A super simple way to instantly switch up your hairstyle is by mixing things up with your part. Ellie Goulding did just that at the Elle Style Awards this week thanks to her deep side part — it was so side swept that it began a little past the arch of her left eyebrow. The part gave her locks a natural lift and style without actually having to style her hair at all — genius. (Photo via Anthony Harvey/Getty)
Beth Wischnia
You can typically find this Texan writing, trying on a new lipstick, gabbing with her identical twin sister or volunteering at the local animal shelter. She finds inspiration from rosé, beauty products, Tex-Mex and cats.
Celebrity Hair
Hair
Celebrity Hair Hairstyles
More From Hair