This Study Shows Workplace Romance Is Alive and Well 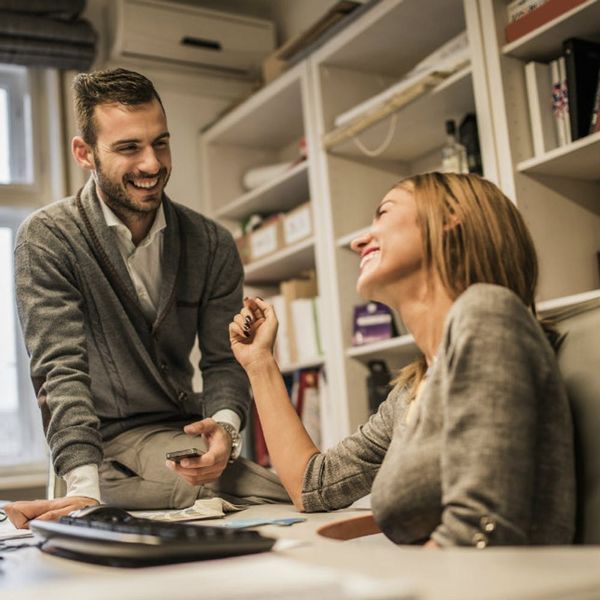 Navigating the dating scene isn’t all Champagne and roses. In fact, sometimes it can seem like signing up for the Whole30 program is way easier than signing up for another dating app. But a new study from ZipRecruiter is showing that there’s one offline place that you might be overlooking in your quest for love. Where is this magical locale, you ask? The same place you’re grinding out your nine-to-five: the office!

According to the study, which polled job-seekers on the ZipRecruiter site, 63 percent of respondents have dated a coworker at least once. Of those in a relationship right now, more than one in four met their current significant other through a work connection — either at the office or through a coworker.

Even more surprisingly, 57 percent say they believe asking out a coworker is easier than asking someone out at a bar. But that feeling wasn’t gender-neutral: 63 percent of men would rather meet someone at work than at happy hour, compared to only half of women. And while most people nowadays, especially millennials, may assume in-person dating is dead and rely instead on the internet to find love, the survey also found that 56 percent of people actually thought asking out a coworker was easier than swiping right. That opinion on online dating, though, showed the same gender split as meeting someone at a bar.

If you’re thinking about turning the office hottie into your new flame, be sure you know the rules within your workplace. Fewer than half of the people surveyed reported being very familiar with their organization’s regs on relationships that get their start on the job, so you’ll def want to dig out your employee handbook before planning your next date.

Do you have a sweet — or sour — tale of office romance? Tweet it to us @BritandCo!

Kelsey Nelson
Kelsey Nelson is a born-and-raised Ohioan living life in South Carolina. She thrives at binge watching Netflix, contemplating what to order at the bar and running any trail or road she can get her feet on. In addition to being a Brit + Co contributor, she writes about southern pleasantries, DIY mishaps and more at North Living South. If she isn’t writing or running, she’s off adventuring with her husband Brad and their Lab/Dachshund mix, Gordy.
Dating
Relationships
Dating Relationship Advice study work