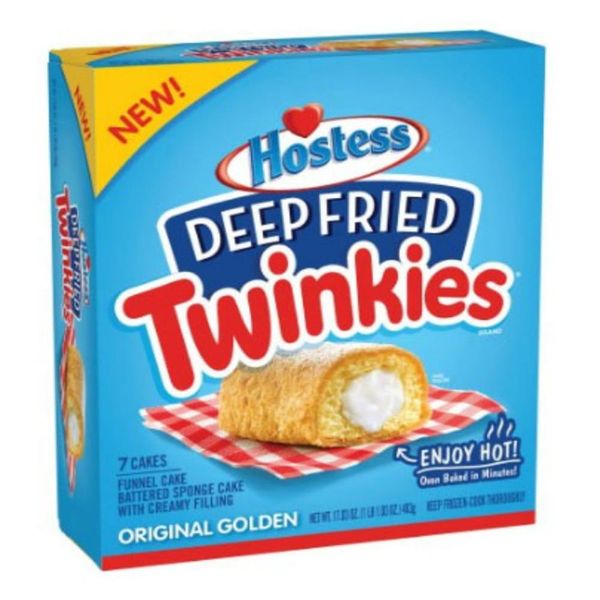 Uh oh… your affinity for Hostess Twinkies just got even more dangerous. The food chain has paired up with Walmart for a three-month-long exclusive on a new take of the sweet treat that will have you salivating for — but later likely regretting — a serious noshing sesh of the golden delights.

Say hello to the deep fried Twinkie. Modeled after a carnival funnel cake, these bad boys are currently available in-store only ($5 for a box of seven) and are housed in the frozen section (a first for Hostess, who has traditionally stuck to dry goods) to be oven-thawed or fried and enjoyed. First strawberry shortcake Oreos, now this?

Available in both vanilla and chocolate, the Twinkies are coated with a cake funnel batter before being doused in oil. Not shockingly, they’re nearly two times as bad for you as the original (a deep fried Twinkie boasts 220 calories, nine grams of fat and 16 grams of sugar, where a regular version has 130 calories, four grams of fat and 14 grams of sugar). In fact, a nutritionist told the AP it would take you about 40 minutes of spinning or 20 minutes of running to work the treat off.

In a surprising twist, however, the outlet reported that you’re actually better off eating one of these bad boys than indulging in a small Starbucks caramel (or cocoa) frapp, which has 420 calories, 15 grams of fat and 66 grams of sugar — yikes!

Though Hostess is aware of the unhealthy factor, the company says that, while it’s trying to cut down on sugar in its products, there is still room for indulgence.

Will you try deep-fried Twinkies? Tell us over @BritandCo!

Nicole Briese
Nicole is the weekend editor for Brit + Co who loves bringing you all the latest buzz. When she's not busy typing away into the wee hours, you can usually find her canoodling with her fur babies, rooting around in a bookstore, or rocking out at a concert of some sort (Guns N' Roses forever!). Check out all her latest musings and past work at nicolebjean.com.
Dessert Recipes
Entertainment
Dessert Recipes
More From Entertainment