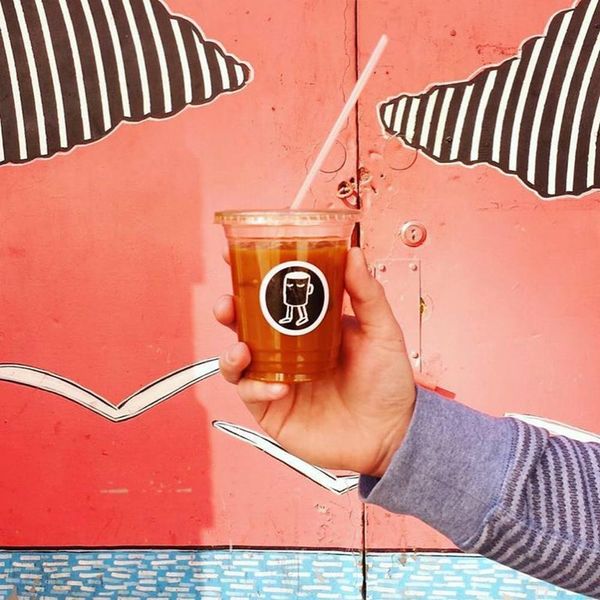 We pretty much live for coffee around here, and any time we come across a new take on our fave energy-boosting drink, we just have to try it. Like when we discovered a life-changing two-ingredient Vietnamese iced coffee. Or that time we gave chewable coffee a chance. And don’t even get us started on how much fun our super scientific boozy espresso experiments were! But we must admit, the latest coffee incarnation sweeping the nation has us feeling a little bit skeptical.

Taking an Arnold Palmer (which is traditionally made with iced tea and lemonade) and reimagining it with iced coffee (plus a bit of almond milk), Nate Long, director of Brooklyn’s Stand Coffee, came up with this, shall we say, very *unique* blend as a new twist on his go-to college drink: coffee and orange juice.

But before you turn up your nose at the thought of your precious, beloved coffee being tainted with the acidity of these typically standalone fruit drinks, consider the facts: According to Eater, mixing coffee with lemon has actually been a popular custom in Russia since, well, forever, and Stand has been serving up the eyebrow-raising concoction since first opening its doors way back in March 2015. However, it wasn’t until last month that the drink made with iced coffee, a splash of almond milk, lemon and vanilla simple syrup really took off.

On some Fridays..... + a very interesting Arnold Palmer made from cold brew coffee, lemonade, & almond milk

What helped it shoot to viral superstardom? Instagram, of course! When Grade A foodie Lukas Volger popped by the Stand’s mobile shop at the Smorgasburg market and forever immortalized his order on Instagram (one cup of said drink, plus a mouth-watering chocolate donut), he helped skyrocket the Arnold Palmer 2.0’s popularity.

Now, coffee lemonade is sweeping the world and being served up everywhere from Character of Coffee in Saint Petersburg, Russia (pictured above) to The Good Lemon in Miami, which is putting the focus on lemonade instead and adding a shot of Panther Coffee cold brew to its Classic Lemonade recipe.

Okayyyy, we’re sort of starting to come around on this one… maybe iced coffee with a little kick of lemon isn’t so strange after all! Guess we’ll just have to head out now and try some ourselves. You know, for science.

What do you think of coffee lemonade? Tweet us @BritandCo.