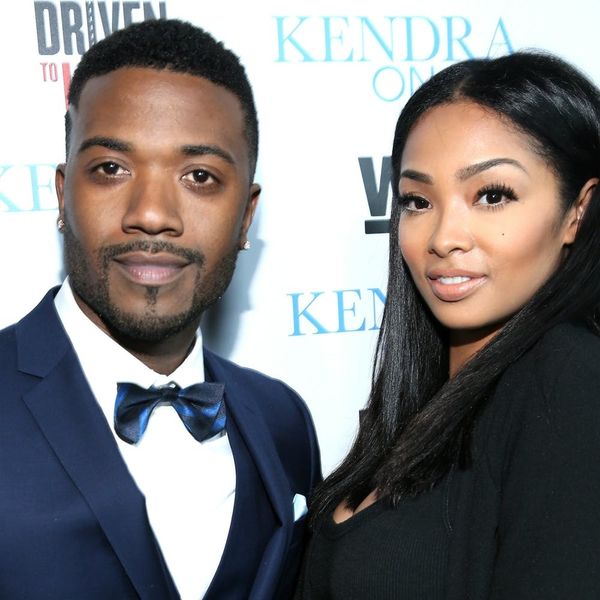 Kim Kardashian West who? The reality starlet’s famous ex Ray J (who earned himself a spot in Kanye West’s notorious “Famous” video due to his former affiliation with the couple) and fashion designer Princess Love (you might remember her from Love & Hip Hop: Hollywood) tied the knot today, leaving the singer’s past far behind them.

Welcoming friends and family (including rapper The Game and sister/singer Brandy) to share in their intimate-but-elegant celebration, the pair became Mr. and Mrs. in front of a small group of 150.

As a fashion designer, we expected nothing less than perfection from Love on her big day, and boy, did she deliver.

Blessings to ma Lil Bro! So proud of your growth! 🙏🏾 May God Continue to Bless you on your journey! ☄#family #fortunate #friendsinhighplaces #GodSpeed

Her Lazaro gown was most definitely fit for a princess (see what we did there?), with its fairy-tale structure and beaded overlay, but it was her non-traditional headpiece that really captured our attention.

Though the stunning bride wore a veil for her ceremony (or was at least pictured in one briefly), the reception saw her forgoing the veil, leaving only her silver Bohemian chain behind. The elegant accessory was the perfect way to draw attention to her flawless skin and makeup — girl NAILED it.

Later still, she appeared to switch things up once more, pulling her hair up into a chic chignon with a lovely barrette of baby’s breath — all the better to dance to the musical stylings of Brandy, who reportedly performed “At Last” for her younger brother and his new bride after acting as Love’s bridesmaid.

“I just want her to have the time of her life and remember it as the best day in the world,” Ray J told People.

From the looks of these shots, we’re going to go ahead and guess that’s exactly how it happened.

Did you have a non-traditional veil or headpiece? Share it with us over @BritandCo!

Nicole Briese
Nicole is the weekend editor for Brit + Co who loves bringing you all the latest buzz. When she's not busy typing away into the wee hours, you can usually find her canoodling with her fur babies, rooting around in a bookstore, or rocking out at a concert of some sort (Guns N' Roses forever!). Check out all her latest musings and past work at nicolebjean.com.
Celebrity Wedding
Wedding Planning and Decor
Celebrity Wedding
More From Wedding Planning and Decor