It Takes 24 Hours to Make This 1 Embroidered Sweatshirt 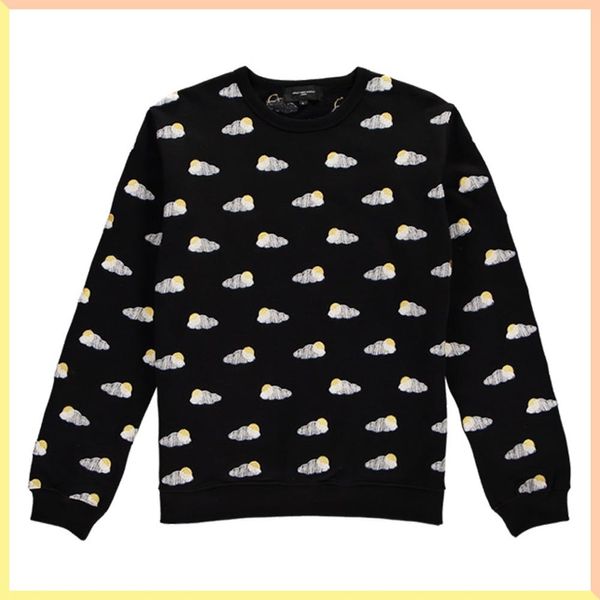 You know your fave sweatshirt? The one that is comfy but still looks great with jeans that you’ve washed to the perfect point of softness? Even though it’s one of a kind to you, there’s probably a ton of other people declaring the same sentiment for the exact same sweatshirt; mass production is the norm for a good chunk of the fashion industry. That said, there are more and more companies coming up with ways to get smaller batches of their product to the public through fair trade. One designer is taking it a step further: making a sweatshirt with 1.5 million stitches that takes 24 hours to complete. It should go without saying, the results are crazy intricate.

Designed by Ashley Marc Hovelle, whose menswear line based in Berlin puts eye-popping designs onto super simple garments, the innovative brand just turned a basic wardrobe staple into a not-so-boring favorite. The design of the sweatshirt is deceivingly simple: A sun and cloud pattern inspired by the works of M.C. Esher and ancient Japanese art. But those 1.5 million stitches require 12 machines working simultaneously to get the pattern just right. In order to have the shirts produced fairly and in the highest of quality, AMH is using top-notch factories in Portugal. Here’s where the Kickstarter campaign comes in: These factories ain’t cheap.

Contributing to the Kickstarter (pledges of $49 USD and up will snag you embroidered articles of clothing, and pledges of $200 and up could snag you one of 27 sweatshirts if you act quickly) means you have a chance to not only help AMH produce their collection fairly, but also to own a piece of the super limited collection yourself. The whole collection is the opposite of mass production, with only 27 pieces of each garment being made. That’s like one rack of tank tops at Forever 21 as a whole collection. Each garment is given lots of love by hand (and machine), which means high quality is guaranteed. Plus, only 26 other lucky individuals will have the same carefully designed sweatshirt as you. No “who wore it best” situations are likely to arise with such a limited range. There might not be a better excuse to start shopping the men’s department.

Kristin Egan
Kristin is a Chicago-based freelance writer who is trying to "adult" as much, or more so, than the next girl. She studied at UW-Milwaukee and also attended "funny school" at comedy institutions like Second City and Improv Olympic. When she's not writing, she spends her time hunting for the perfect iced coffee, listening to too many podcasts and hanging out with her cat, Lou.
Kickstarter
Style News
Kickstarter