WHAT?! 11 Items You Should Actually Buy from the Men’s Department 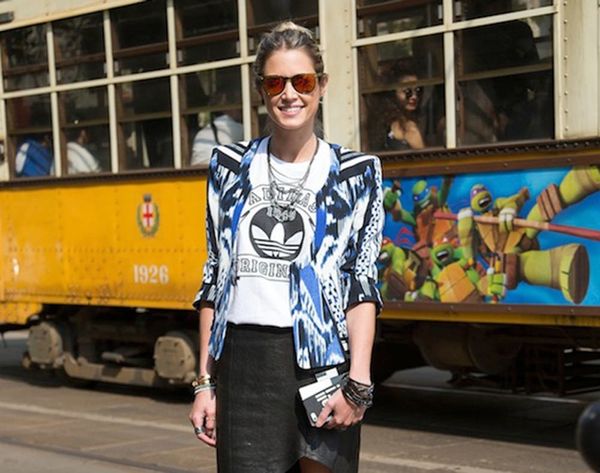 Remember that old song that crooned: “This is a man’s world”? Yeah, we think that’s majorly a thing of the past too. (Who run the world? Girls who code et al.) With that being said, I’m about to drop a major truthbomb on you all: There are things that you’re picking up at *your* section of the store that you should be picking up at mine. Yes, that’s right, there are items of clothing on your wish lists and Pinterest boards that you should be scooping up in the men’s department. There’s really no shame in that because (as this friendly Buzzfeed article points out) typically men’s clothing is produced with better quality fabrics AND is often cheaper. Yup, since there isn’t as much of a variety in the products being made, manufacturers save money on templates for menswear and spend it on fabrics. Who knew?! So sneak over into the men’s department next time you stop at your fave shops and snag some of the most coveted menswear around — here are a few of our faves:

1. Women’s Button-Up Shirt + Men’s Twill Popover Shirt ($75): Pick up a chambray (or any button-up) in the men’s department and you’ll have one versatile piece. Dress it up with some pants or belt it and turn it into a dress. (via Curry Made)

3. Women’s Oversized Jacket + Men’s Oversized Wool Coat ($237): It’s all about layers during the winter, and sometimes the women’s section just doesn’t make the cut. Stick with the guy’s department for your layered chic street style when it comes to an oversized coat and you’ll have more than enough room for a scarf, necklaces, a cardigan and who knows what else under that coat. (via Elle)

4. Women’s Beanie + Men’s Beanie ($3): Women’s beanies come in all prints and styles, but are typically thinner. Cover up those ears (and your messy bun) with a thicker and warmer version from the guy’s beanie bin. (via Stylishly Me)

5. Women’s Sweatpants + Men’s Slim Sweatpants ($70): Strut around town (sweats aren’t solely reserved for the couch anymore) in men’s sweats, just like with beanies they will be thicker. Your legs will thank you later. (via Sophia Laudry)

6. Women’s Athletic Tee + Men’s Athletic Tee ($28): Graphic and athletic tees are a fun pop to any streetwear. Upgrade your tee game with a stop in the men’s section. Added perk: they usually have deals if you snatch up more than one ;) (via Who What Wear)

7. Women’s Wool Socks + Men’s Wool Socks ($40): Keep your feet extra warm with thicker wool socks found in the men’s section. Just make sure your boots will still fit before buying those toe warmers. (via Kelly in the City)

8. Women’s Joggers + Men’s Joggers ($100): There’s still skeptics on the whole jogger trend, but men definitely aren’t in that category. Nearly every men’s section has a huge variety of joggers, possibly the first time men have a wider selection when it comes to clothes. (via Publish)

10. Women’s Boyfriend Jeans + Men’s Tapered Jeans ($80): Going for the boyfriend look? Why not just pick out his jeans instead? They’re typically cheaper and actually nicer quality since the guys are all about the denim ;) (via Eat Sleep Wear)

11. Women’s Flannel Scarf + Men’s Flannel Scarf ($20): Ladies’ scarves can often be too thin for the frigid temps (stop making them only for looks, designers!). No worries though, men’s designers know what’s up. They’re always thicker, ensuring men’s necks stay warm. Throw one around yours and you’ll never be shivering again (okay, that is probably a lie). (via Heart of a Blonde)

Are you planning on shopping in the men’s department? Let us know in the comments.