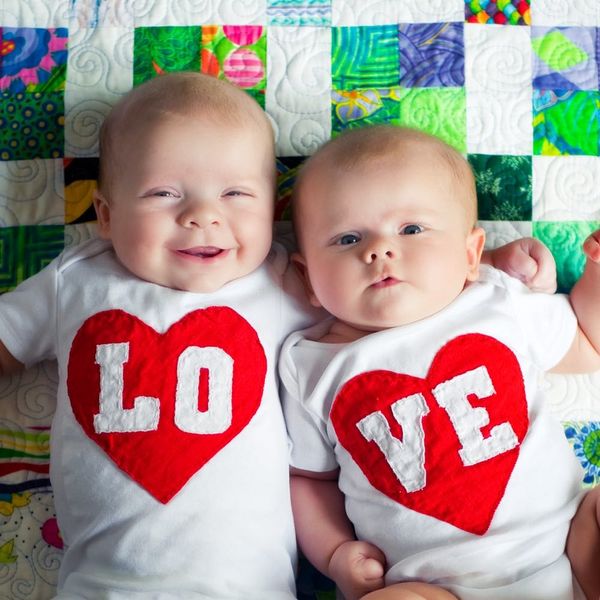 Valentine’s Day is upon us, and so we turn to thoughts of love and romance. Today, we look at some of the baby names that have love embedded in their meaning, bringing an extra measure of tender feeling to your own little love bug; names that go beyond the more obvious Amy and Aimee, with some international flair.

1. Amanda: A longtime favorite that retains its delicacy and popularity, Amanda rocketed to stardom in the ’80s and is still at #316. Her countless notable bearers include characters in Tennessee Williams and Noel Coward plays; her adorable French diminutive is Amandine.

2. Amias, Amyas: Another name beginning with the Latin prefix for “love,” this boy name is beginning to get some attention as a quasi-unique name with an attractive sound and feel.

3. Carys: Cara means “dear,” and several names embody that meaning, including this sweet Welsh example that became known in the US when Catherine Zeta-Jones and Michael Douglas chose it for their daughter in 2003.

4. Davina: All names related to the Hebrew David mean “beloved,” and this includes the feminine forms Davida and Davina, the latter having appeared on the US list from 1968 to 1984. It is currently heard on the TV show Transparent.

5. Davis: Another member of David’s family, the more distinctive Davis is a surname form for boys that is currently climbing in popularity, possibly as a David namesake. It now ranks at #474 nationally and 222 on Nameberry.

6. Drury: This French surname name meaning “dear one” or “sweetheart” has an appealing sound, as well as irresistible meaning. Drury Lane is a famous London street and theater name.

7. Esme: This wonderful Salinger name gets its beloved meaning as a relation to the French Aimee. A Twilight saga vampire name, it’s a celebrity favorite, chosen by Michael J. Fox and others. Esmé ranks at a high 35 on Nameberry and 38 in England.

8. Kalila: A lovely, lilting Arabic name meaning “beloved,” Kalila is also the name of a range of mythical mountains. In 2015, 42 girls were given the name in the US.

9. Kerensa: This Cornish/Welsh name meaning “love” would make a nice, more exotic update to Karen; it can also be spelled Kerenza.

10. Milena: Popular in Italy and several Slavic countries, and the birth name of actress Mila Kunis, Milena entered the US Top 1,000 in 2012 and is now #760. Letters to Milena is a book of, yes, letters by Franz Kafka.

11. Suki: This Japanese name meaning “loved one” is among the most familiar and accessible Asian appellations, with a lot of energy and charm. It’s also sometimes used as a nickname for Susan.

What’s your favorite love-themed name? Share it with us @BritandCo!