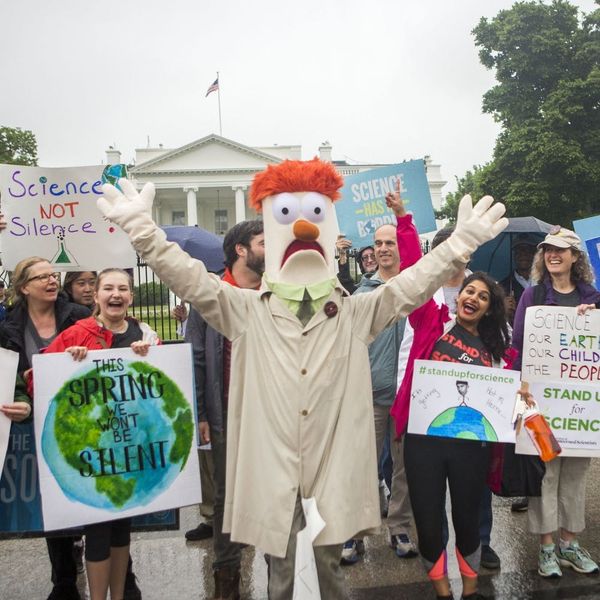 As we (and celebs) do our part to celebrate our great planet today, getting informed (thanks, Netflix!) and shopping for a good cause, thousands more followed the lead of those that participated in the Women’s and Tax Day marches, joining their voices (and signs) together in unison to take a stand for another cause they strongly believe in: science.

Calling it “the first step of a global movement to defend the vital role science plays in our health, safety, economies, and government,” the group paid homage to Mother Nature (rather fitting for Earth Day, no?) and the perils science has proven she now faces, from climate change to deforestation. Check out 12 of the best signs we saw from the March for Science below.

1. Rising Like the Ocean. If the ocean is rising, so are these protestors to make their voices heard loud and clear.

2. She’s With Her: Resurrecting Hillary Clinton’s campaign slogan of “I’m with her,” this science-lover threw her support behind a larger female presence: Mother Earth.

3. “Bill Nye Tho”: Giving a clever shoutout to his scientific hero, this man said it all with his sign reading, “Bill Nye tho.”

4. No Plan B: This gentleman reminded us all that there is no Plan B when it comes to Mother Earth: She’s pretty much all we’ve got. (Photo via Scott Eisen)

5. Not Lion: Even animals got in on the action, with this life-size lion bearing a sign which bore a cheeky play on words, reading, “I’m not lion about climate change.” (Photo via Karen Dueey/Getty)

6. Girls Just Wanna Have Funding: The lyrics to Cyndi Lauper’s classic ’80s tune got a whole new meaning when this march attendee added them to her request for research funds.

7. The Lorax’s Plea: Dr. Seuss’s old Earth-loving pal The Lorax made an appearance too, saying, “I speak for the trees.” (Photo via Jessica Kourkounis/Getty)

8. Stranger Than Fiction: A gentle reminder that science is a far cry from the fiction we see in movies and books came from this Boston marcher. (Photo via Scott Eisen/Getty)

9. Not Rocket Science: Braving the rain (and an apparent chill), this man reminded us all that believing in science is not a hard sell, bearing a “It’s not rocket science… actually some of it is,” sign. (Photo via Jessica Kourkounis/Getty)

10. No Alternative Facts: No alternative facts here: Mother Nature trumps them all. (Photo via Jessica Kourkounis/Getty)

11. Science for Humanatee: This clever sign-holder used an image of a manatee to complete her sentence, meant to be read as “Science for humanity.”

This #marchforscience protestor has a PhD in neuroscience and has a message from Boston
Live blog of today's events: https://t.co/XWalX8nmU9 pic.twitter.com/VvSXqluBOx

Which sign was your favorite? Tell us over @BritandCo.

Nicole Briese
Nicole is the weekend editor for Brit + Co who loves bringing you all the latest buzz. When she's not busy typing away into the wee hours, you can usually find her canoodling with her fur babies, rooting around in a bookstore, or rocking out at a concert of some sort (Guns N' Roses forever!). Check out all her latest musings and past work at nicolebjean.com.
Earth Day
Current Events
Earth Day Politics science
More From Current Events